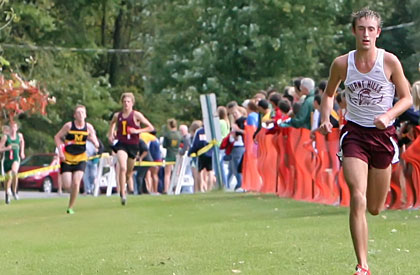 Newspaper: The Pittsford Mendon Cross Country team’s seasons kicked into high gear last week as the team’s had a Monroe County league meet on Tuesday along with the East Aurora Invitational on Saturday.

This was Mendon’s first trip to the East Aurora Invitational which featured 35 teams and they made their presence felt. The Vikings won both junior races along with having four individual race winners.  FULL ARTICLE HERE - ANOTHER ARTICLE HERE

Arcuri won his race with a time of 17:20.4, finishing 14 seconds ahead of runnerup Sam Anderson of South Lewis. Sauquoit boys finished third as a team.  FULL ARTICLE HERE - ANOTHER ARTICLE
Photo by UticaOD.com
PHOTO GALLERY Highlights: The Somers boys adn girls swept the biggest division and had fastest team averages on the day.

Meet Results
Meet Highlights: Shaker junior Mike Libruk said his team knew what was coming. He joined a few teammates over the summer in visiting the course at Lakeside Park in Pawling. He knew the nearly 500-meter uphill that meets runners after the first mile was the kind that could feel like a punch in the mouth.

“We wanted to back off a little bit in the beginning,” said teammate Jon Vallecorsa. “We knew the hill was coming.”  FULL ARTICLE HERE

Meet Highlights:  Regis won its second consecutive championship – the first such repeat for the school in the meet’s 18-year history.  Ryan Phillips ran away from the field in 10:01, a track record, and the first Regian to win the individual 2-mile trophy. Photo Chris Febles

Meet Results
Highlights: In a place where only animals usually roam, some 3,100 high school runners from six states were set free yesterday.

Dana Giordano of Bernards and Mike O'Dowd of Colts Neck were the star attractions of the inaugural Six Flags Wild Safari Invitational in Jackson, winning the girls' and boys' titles, respectively.  FULL ARTICLE HERE - ANOTHER ARTICLE 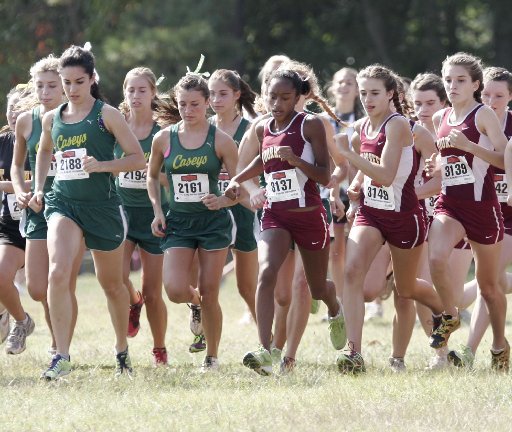 Meet Results
Highlights: On the girls' side, Giordano wasted no time in torching the course in the first varsity race of the meet. The junior won the girls' Varsity D race by 31 seconds in 18:08. Point Pleasant Beach junior Brianna Feerst was second.

``This was the first time I actually saw live animals while I was running,’’ Giordano said. ``When I run around the back roads where I live, all I see is roadkill.’’  FULL ARTICLE HERE

Warwick takes some bumps on the road in Illinois

Articles
Meet Results
HIghlights:  The Ursuline girls won the varsity race with a 19:23 average for the 2.5 mile course.  Xavier beats Regis for boys title with 15:09 average.  Konrad Surkont of Stuyvesant's 13:50 was best of the day.

Highlights:   Eddy Pfeil took on all the runners from the big schools and won. The Roy-Hart sophomore recorded the fastest time of the day at the Western New York Track and Field/Cross Country Invitational at Beaver Island State Park. Pfeil's 16:36.7 over the 3.1-mile course won the Division III race as well as the fastest time designation.

CROSS-COUNTRY: Results from the Stewart Memorial and Bowdoin Park Classic

At least 19 meets are on tap this weekend for New York teams, a few of them being out of state.  The New Balance Ocean State Invitational in Rhode Island always draws a handful of NY teams.  Averill Park, Bayside, Brewster, Greenwich, Monroe Woodbury, Lourdes, LaSalle Institute (Troy), and St. Anthony's will all make the trip up.

The Baldwinsville Invitational will be one of the biggest meets this weekend with 56 team registered.  Liverpool, Ithaca, West Genesee, McQuaid, and Burnt Hills will match up in the large schools race.

43 teams will head to Utica for the 68th Annual EJ Herrmann Invitational.  Holy Names, Beaver River, and CNS will all be racing.

ARMORYTRACK.COM WILL BE ONSITE when over 50 schools head to Lakeside Park in Pawling for the Green Mt. Invitational, a preview of the NY State Championship course.  North Rockland, Arlington, Shenendehowa, Queensbury, and Canadaigua will all face off in the girls seeded race.  The seeded boys race will feature Geneseo, Walt Whitman, Arlington, Queensbury, and Shaker, among others.  There will be four varsity girls and boys races each.

COACHES AND PARENTS:  We can't be everywhere so please send us your team pictures from this weekend and we will post in this weekend highlights section.  Last week Geneseo and Warwick sent in their pics and they got front pag coverage all week.  Who will be the teams to get photos on this week?  Send them to tim@armorytrack.com