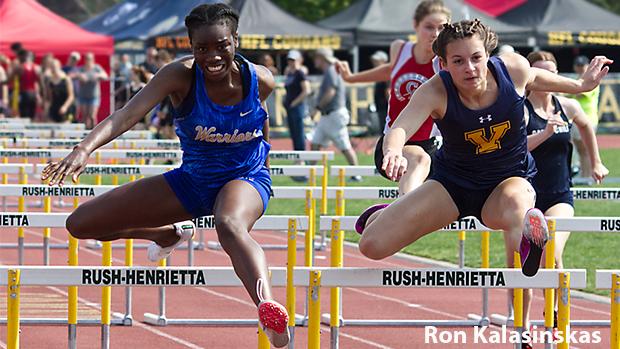 The Indoor State Champ in the High Jump is back again Outdoors, and reached unprecedented heights in Section 5. At the Monroe County Champs, held at Rush-Henrietta HS, Camryn Cole (Webster Schroeder) (left) competed in both the High Jump and Hurdles. Cole won the hurdles, but it was the High Jump where the big marks came. The Junior cleared 5-11 for a new Section 5 Record, and the highest mark in New York State since 1990.

The mark ties Cole for NY #2 All-Time in the event. Cole jumped an Indoor best of 5-7 to win the 2022 Indoor State Championships, then improved an inch outdoors with a 5-8 clearance at the Sodus Showdown on May 7th. After traveling to Syracuse to clear 5-5 at the Bville Invite, Cole returned home to achieve the 5-11 mark.

Cole is now tied with Alison Smith (Clarence) for NY #2 All-Time. Smith holds the Indoor State Record at 6-1 before hitting a best of 5-11 the following year Outdoors, way back in 1988. It would stand as the State Record for two years, before Shelly Choppa (Glens Falls) became the first and only New Yorker to clear 6-0 Outdoors. New York saw two girls clear 5-10 back in 2011, but no girl has come close to the State Record since then.