State Records, especially Overall State Records, are hard to come by. In an organized sport that dates back well over a century here in New York, being the best ever is no small feat. Not only do you represent yourself, your school, your State, you also represent all the advancements in training, technology and physiological knowledge that culminated in that performance.  As such, State Records fall under a unique level of scrutiny.

Our sport is split into two unique camps: Track and Field.  On the track, the requirements for a State Record are clear. Since 2001, FAT Timing has been a requirement for any mark to be accepted. In addition, when Outdoors, for events under one lap, a wind-gauge is required.

One of these requirements came to a head more recently than you would think.  In 2018, Katelyn Tuohy (North Rockland) was clocked with a hand-timed 3000m split at the Loucks Games, during the famed Friday night 3200m run. Video of the race verified the hand-time, but the mark was later rejected because of that FAT requirement. Luckily, Tuohy later surpassed the hand-time in competition at the New York State Meet.

Field events share the wind-gauge requirement for both the Long Jump and Triple Jump. The legal wind must be measured by a wind-gauge at equal to or less than 2.0 meters per second. However, that's where the similarities end.

How Do Field Events Differ?

There are two other factors that come to a head in the field events, that the Track does not see.  For a mark to be "ratified," a certified official is required to use a "Steel-based Measuring Tape" to calculate the distance of the mark. The rationale behind this is that a steel tape is more uniform than that of cloth tape, which can both spiral, as well as sag with inadequate tension, affecting the actual distance measured.

The other criteria is that there is a level playing field.  This is not referring to the competitors, but quite literally, to the facilities being used. For the Horizontal Jumps, the pit must be flush with the end of the runway, otherwise it is designated as a "low pit." For Vertical Jumps, the height must be measured from the center of the cross bar rather than use the heights on the standards, to account for "bar sag." And finally, for the throws, the sector must be held on a plane with no discernible incline or decline.

Much like Tuohy, the throws standard came to a head in 2013, in which Rudy Winkler (Averill Park) threw a National Record in the Hammer Throw at West Point. It was argued that Winklers sector was above the allowable decline in elevation between the circle and the implement landing point (he was throwing downhill). The controversy sparked such an outcry, that Officials went back to the site of the throw to measure the elevation change. It was determined that there was no cause to revoke the record.

How Do Technological Advancements Affect Record-Keeping?

Record keeping utilizes standards across time to keep fairness in rankings. But what happens when that fairness is met with technological innovation? MileSplit maintains Top 50 All-Time lists for every event that has existed for two decades or more (sorry, Indoor Steeple).  Lists date back to the origins of the sport in New York, first compiled by Larry Byrne, and subsequently passed down to us. Marks from the 1960's still stand among the ranks.

As much technological change can be seen on the track, there is just as much to be seen in the field.  In the 1970's, Pole Vaulting moved to fiberglass poles from both wood and steel variations of generations past.  Jumping and throwing specific spikes began to improve year over year, pushing the records ever further.  The sport evolved.

Note: There are two instances where All-Time rankings were differentiated. In 1987, the Javelin was changed from a HS Weight, to the use of the International Style Weight.  A new ranking list was generated.  Likewise, in 1985, the scoring tables for the Pentathlon were converted, and the two ranking lists were separated.

Where Are We Now?

The issue of Record Keeping came to a head this past week. On Monday, Alissa Braxton (Commack) jumped a new State Record distance of 41-10 in the Triple Jump at Suffolk Community College (see video here). However, the mark was achieved in a visibly low pit, as well as measured without a steel tape. By standards set out by Track and Field News, the mark should not count as a Record, and if it had been a National Record distance, it would have been dismissed.

The discrepancy highlights a new issue arising in the Track and Field community. In recent years, more and more tracks have been designed with retractable runways that reveal a pit underneath (think of a Steeple Pit cover).  By design, these pits are record ineligible, as they are required to hold the sand lower than the metal lip that holds the track panels above. The problem has become so pronounced, there are only one or two record eligible jumping pits left within the State.  Currently, only Ocean Breeze and the Armory are truly "flush" with the runway.

After much deliberation, a new standard was needed.

In order to find equality across the state, it was determined that pits must not be "egregiously low." In more exact terms, if the pit is recessed, the sand must be flush with the metal lip of the retractable runway.  This not only would cover Braxton's jump, but also the Outdoor State Long Jump Record set by Rayvon Grey (Beacon) in 2016, at Cicero-North Syracuse (see lead photo).

What about the Steel Tape requirement? The situation is unique here. We have video footage of the jump being measured, where the tape is clearly pulled taut, and a steel measuring tape was not available. Do we discredit the jump if we know the mark was measured correctly?

If not for the video, it might be harder to accept the jump.

Luckily, technology is advancing here. Ocean Breeze employs technology of their own to eliminate this issue.  Both the throws and the jumps are now measured by laser, eliminating any human error. But it is unreasonable to expect every meet to employ this technology: at least at this point in time. Where Do We Go From Here?

Best case scenario here is a repeat of Tuohy in 2018.  A controversial mark gets surpassed later in the season, either at the State Meet at Ocean Breeze, or New Balance Indoor Nationals at the Armory.  Until then, we can't discount the mark as the State Record, without employing the same level of scrutiny to every other record on the books.  Many of the pre-existing records occurred without video or photo coverage of their efforts, so we can not confirm that jump as having been explicitly legal to the same extent as Braxton.  We can't also punish an athlete because they enjoy a level of multimedia coverage that did not exist at the time of the previous record.

For future consideration, we recommend all coaches with athletes capable of State Record attempts, both carry a steel tape at all times, and have a video recording of the jump in question available.  Much like the level of scrutiny jumps when you are differentiating between a Sectional and State Record, that same jump in scrutiny occurs when moving from a State Record to a National Record, as designated by Track and Field News.

But for now, as the retractable runway pits become more commonplace, New York had to adopt a new standard for Record Keeping. 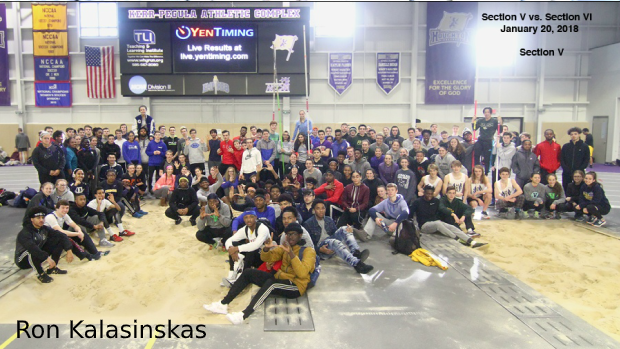