--Fourth in a Five-Part Series-- 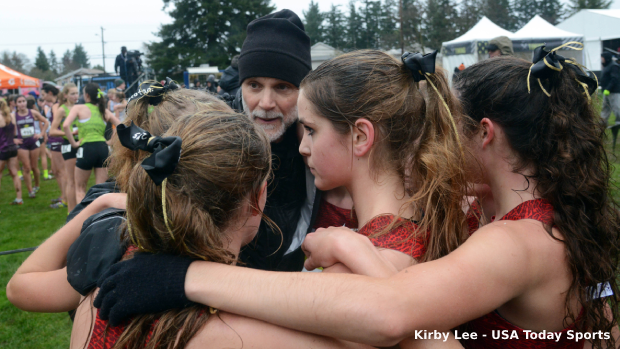 The FM Girls await the results after finishing in 2015, where they would win by nearly 100 points.

- - -
At Fayetteville-Manlius, they call it "selflessness." It requires thinking of others, not only of oneself. It also requires doing for others, even at the expense of oneself.

This may sound like an obvious approach to life, and running. After all, modesty and service are tenets of all religious doctrine. But we humans are wired with an ego that says: me, me. For teenagers, trying to figure out who they are and where they stand, "me, me," can seem impossible to overcome.

In cross-country, at F-M, selflessness means putting the team first, above all else. Another way to think of it is, putting the community first, making the group the priority. Team scoring in cross-country facilitates that mindset. You know the saying: every teammate counts.

Still... teenagers? If a runner stays out late the night before a race, or eats junk food, or dogs it in workouts, the runner is letting his or her community down. Ego: three; selflessness: nothing. Are you in or out? Young men and women, can you see your way toward trying to be something greater than yourself?

Remember: Coach Bill Aris spends 80 percent of his time on emotional development. His goal is to reduce dependency on the ego while building up the joy in selflessness. The mission at F-M has never been expressed in "winning" but in becoming better young people with noble values of community and striving; and if you achieve that goal good things will likely happen and you will feel fulfilled. Even when they do win, the F-M athletes will never betray humility and mug for the camera in video interviews. With all the glory accorded them, the F-M runners do their best to shun attention.

At 1:56, the perennial FM question comes up, "What is your secret?" with the answer always being team oriented, running for each other.

In these self-absorbed times, with the internet and social media making "me, me" the new normal-how many "likes" do you have? How many insults have you spread?-old hat values face an uphill struggle. In cross-country, we are able to conquer hills, so who knows, maybe we have a chance...

Even Aris admits that over the years achieving true selflessness has become an ever tougher challenge. The Stotans of yore were not automatic converts. Selflessness cannot just be pulled out of a hat, it must be cultivated. Those young runners, presented with new and bold ideas, grew in an environment in which Aris' creative teaching style  eventually had an effect and the athletes embraced the pivotal messages with gusto. Today's nonstop assault of "me, me" is an omnipotent force. Insults rain down from the highest levers of cultural and political power. You could say we're in a battle of good vs. evil, vulgarity vs. purity.

Teenagers were never more vulnerable. As with good nutrition, Aris believes that kids want to do the right thing, want to do what's best for them, if only led in the proper way. One of the secrets of selflessness is that by "running for others" a youngster is taken out of the stressful realm of "performing" for oneself and put into the more risk-free realm of running for the greater good. If it's all about the team to begin with, and everyone is held accountable to one another, the responsibilities are shouldered in a less personally severe way. Five runners, or seven, are truly in this thing together.

It may seem like a nuanced distinction, but when a runner takes the line "for others," he or she is, ironically, freed to run better without feeling burdened by the self-imposed judgment an individual pursuit often serves up. Instead of needing to be a "performer," the athlete is more at ease (but no less competitive) when designated as a "contributor."

"Selflessness," writes the renowned sports psychologist Jerry Lynch, a source of F-M ideas, "is an active process of devotion to others' welfare and interests." Such thinking became contagious at F-M, and the early adherents still refer to it as the fulcrum of their success. "We completely bought into the idea of total selflessness," Owen Kimple, an Original Stotan from the 2004-05 period, told me.

It might surprise some people that teenagers could be convinced of such hard-won virtue, and then act upon it. How "teenagers" are regarded in our society is central to Aris' presentation of humility and a higher plane of thinking. A growing number of neurologists, psychologists and social scientists say that teenagers have a far greater capacity for learning than we give them credit for, if only the pernicious forces of "junk media," as one expert called it, can be submerged in favor of humanity. Let's not give up on kids; they learn to respond to our expectations.

One expert I quoted in "Amazing Racers" posited that the whole idea of the teenage years as being rife with inadequacy is an American invention of infantilizing. Many other cultures do not frame the ages of 13 through 19 as being a special category in need of special handling. It's an intriguing premise-a compelling nature or nurture argument.

When selflessness works, you can't stop it. At F-M over the years, team leaders have been so keen to uphold selfless values that they, not relying on the coach, have called out teammates whose behavior or running style showed a lapse in good judgement. Every athlete on the same page has an enriching poetry to it. The team becomes so immersed in the language of understanding that the results themselves become an afterthought. That is when-using the F-M model-you race your best. # 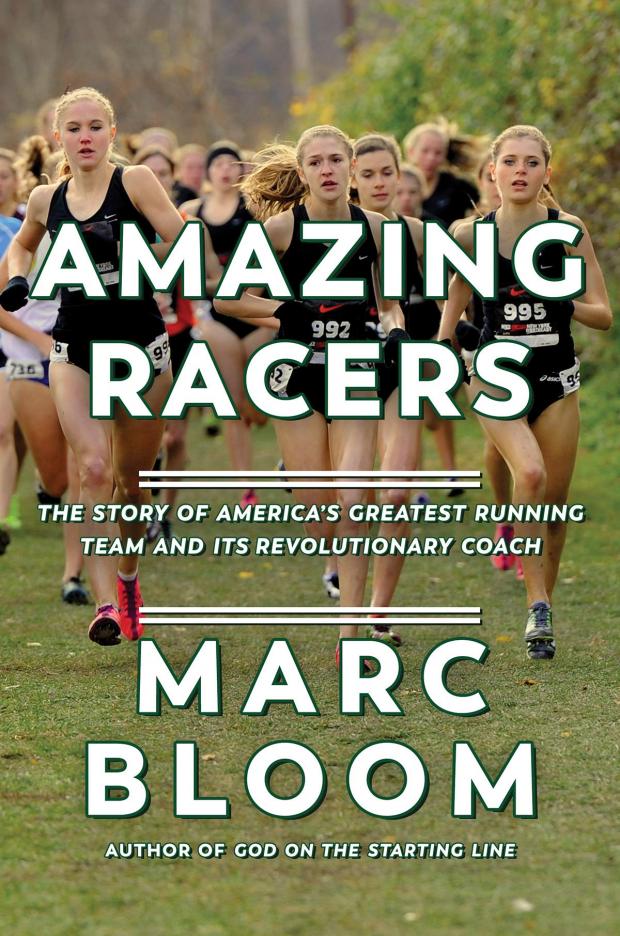 Marc Bloom was the editor of four national running magazines including Harrier XC, which led to the start of NXN and Great American. "Amazing Racers," Bloom's tenth book, will be published August 6 by Pegasus Books. That same day, on Tuesday, Aug. 6, the book will be launched with a Barnes & Noble event in the Syracuse area, at the branch in DeWitt. Bloom and Aris will speak and sign books. Former F-M athletes will be in attendance. All are welcome. More information to come. www.amazingracersbook.com. "Amazing Racers" can be purchased at Amazon and wherever books are sold.