Under The Radar, In Plain Sight

After breaking her foot in 8th grade, Nadia Saunders (North Rockland) was unsure of her track and field future. She did not compete that year, allowing her foot to heal. Looking back, there was some wisdom in that decision. As a 9th grader, she came back from injury strong, hurdling her way to State Quals in 8.52, and jumping at the same meet in the Long Jump for an impressive 18-0. Not bad for a freshman in a very tough field.  By that time, the North Rockland name was well into the State and National discussion, although much, if not all of that stemmed from the track.

One year later, and that team reputation still was coming from exploits on the track and trails. But that was soon to change. Saunders had made the State Meet for the first time, but was seeded 6th in the triple jump.   As a sophomore, even getting out of Section 1 can be a challenge, so being on the boards in Staten Island was a goal achieved in itself. Yet, anything can happen at States.  With a new personal best, she flew past the competition to win in a 38-1.75, for North Rockland's first State Title in the jumps since 1999.

"Winning States as a Sophomore was a really good feeling. I didn't expect to win the triple indoors, but doing so really helped me grow as an athlete." said Nadia. In outdoor that same year, Nadia planned on coming back to defend her Indoor Triple Title, while also adding the Long Jump to her schedule. But a sore ankle proved to hold her back from the pounding runway of the Triple, and she decided to just land in the sand for the Long Jump. While most athlete may be frazzled by the late season change, Saunders took the opportunity in stride.  She not only jumped well enough to win the competition outright, she added to those accolades with a new personal best of 19-2.25.

Sophomore year had been a whirlwind of activity.  Saunders now had two State Meet medals, in two separate events.  She has also been proven to be a clutch performer, both times coming in seeded outside the top slot. Now a junior, Saunders has noticed the rising tide in her event. There are five girls over 39-feet this year, including State Record Holder Alissa Braxton at 41-9.75, whereas last year, the top mark at the end of the season was just under 39-feet.  Saunders is a part of that quintet, jumping a new best of 39-3.5 earlier this year.

"The competition is definitely harder than last year, but knowing that it is so competitive just makes me want to work harder and be better." says Nadia. 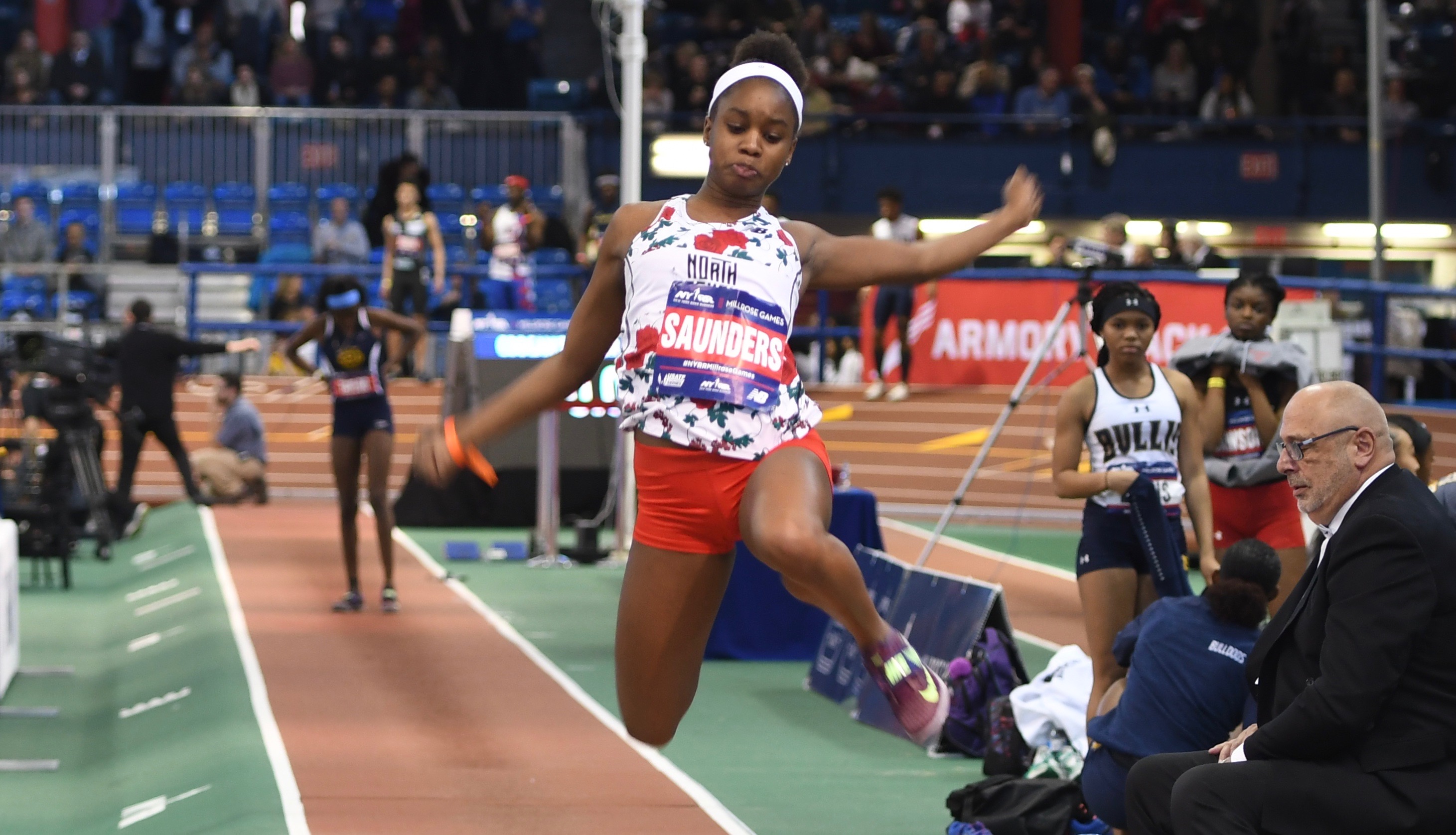 Nadia has several goals for her season ahead. One is to be a repeat State Champion in either jumping discipline. She has not decided which one of the jumps she might focus on at States, but time will tell.

"All American in the Triple Jump, would be another goal," said Nadia. "Being in a field event in arguably the toughest section in the State is 'a lot of fun!'" says Nadia. "Knowing that I am one of the top jumpers in my section, definitely gives me the confidence I need for harder meets."

Nadia is not only an extremely successful jumper, but she has been one of Section 1's top hurdlers for the past few seasons. 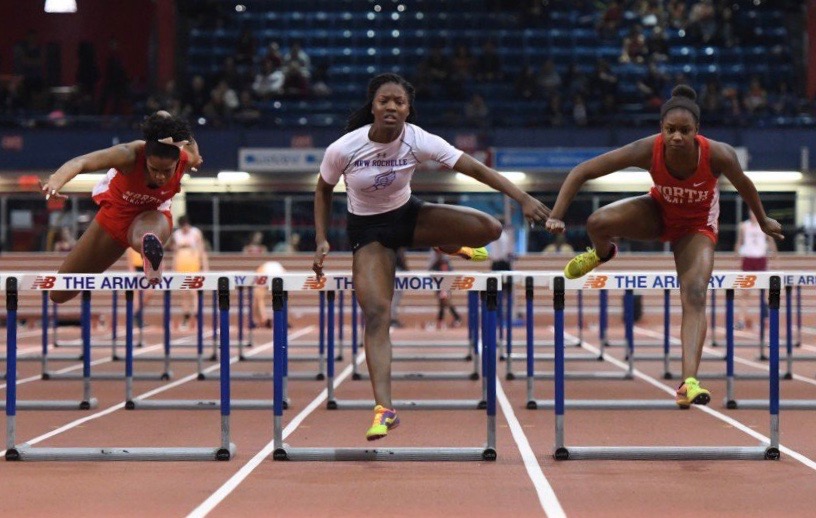 Recently winning The Section 1 Class A championship with a new PR of 8.28, Nadia's jumping talent and her training are allowing her to round out her abilities in a dominant way. "Triple jump would have to be my favorite, but 55m hurdles is a close second." says Nadia.

That triple threat has been put to good use by the coaches at North Rockland, both Head Coach Brian Diglio, and Jumps Coach Kyle Murphy.  North Rockland recently performed a "clean sweep" in Section 1, winning Leauges, Counties, and Sectionals.  No small feat when you are up against some of the best teams in the State, storied names like New Rochelle, Arlington, and Suffern.

How To Field A "Complete Team" For Championship Season 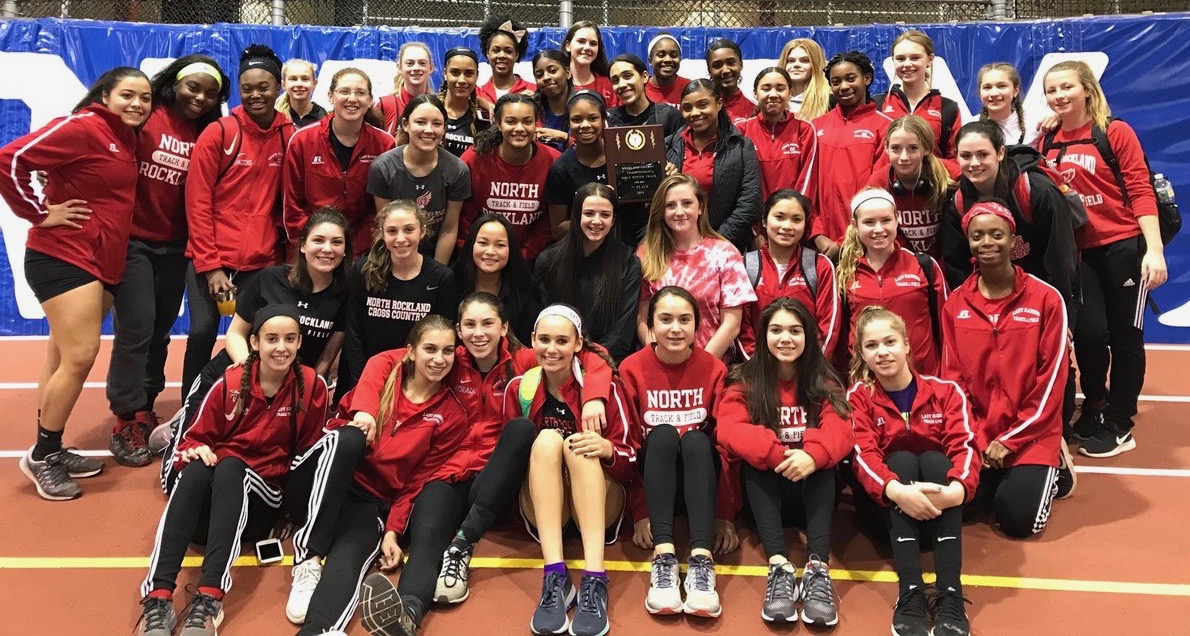 Behind every great athlete, it's not hard to find a dedicated coaching staff. Every team and connection looks different, but at North Rockland, the combination is working together for the common goal, where the talent is plentiful, and the successes many.

At the helm is Brian Diglio, who serves as Head Coach for both XC and Indoor Track, before he transfers his attention to softball in the Spring. Diglio focuses his time on the middle and long distance runners, providing continuity between the two seasons, also adding in the walkers.  Add to the mix Coach Kyle Murphy, who takes over as Head Coach in the Spring, and focuses on the sprinters and hurdlers year round, while Coach Rocco Marino handles the throwers. It's a perfect balance for a well-rounded program.

Diglio has the challenging job of organizing this large and talented team to maximize their greatest potential.  "Ever since I became a head Coach, one of my goals was to always try to field a complete team. It is really all I have ever known."  'Digs' (as the kids call him) was a high school athlete for Coach Lou Hall at Monroe-Woodbury, and he remembers him always finding a way to get points in every discipline. When he first started coaching, he was given advice by Ray Sussman and Ray Kondracki that he has always held onto; "the points are in the pits" they told him.

In Section 1, the competition is elevated beyond nearly any other in the State.  Becoming a team that focuses on one discipline won't get you very far in the standings, "If you don't cover all the events, you are going to get beat!"

He takes great pride in being able to have scoring athletes in all seventeen events in championship meets. He credits this success to the size of his program, stemming from the benefit of being a large high school. "It obviously couldn't also be done without tremendous assistant coaches, and I have two of the best." Says Diglio. 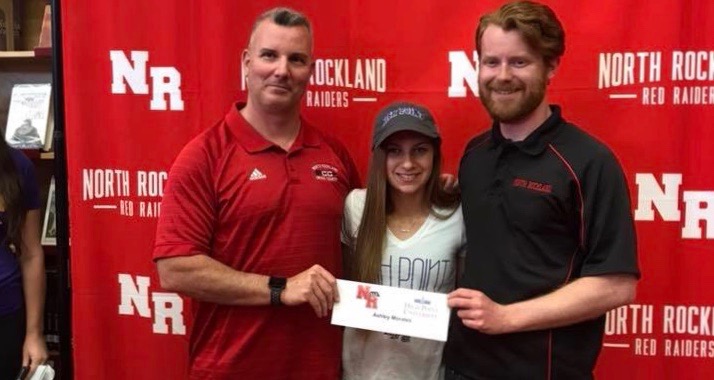 In reaching for those "points in the pits", Coach Diglio (left) says that "from the moment Nadia joined the team she has been a dream to coach. Her talent was evident from the start, and she learned the value of hard work from leaders like Sofia Housman, Ivana Lopez and Emmanuela Lauredent." There is a proud tradition of hurdling at North Rockland and "she fit right in" Says Diglio. "She is willing to do whatever it takes to help the team, scoring 28 points in the County Championship and 30 points at Sectionals last week!" She may even try to test her leap at high jump this spring to help out even more. "If you don't bring your "A" game to every meet in our section, you are going to get hammered" says Diglio. This is great for our girls because they know how hard they need to work from day one if they are going to try to win any championship meet.

Coach Kyle Murphy (right) has been at North Rockland since 2013 and works specifically with Nadia as her Jump and hurdle coach. "Nadia is easy to coach," says Coach Murphy, "in the sense that she is very self-motivated. Her biggest strength is her ability to step it up in big moments, both for herself and for her team," says Murphy. "She always has a big smile on her face when she's competing, she just loves this sport!"

Nadia has earned her time in the spot-light, as a two-time State Champion in the hardest division in the State, but she is often overshadowed by other talent on the North Rockland team. Having World Record setting Katelyn Tuohy as a teammate has been a "blessing and a curse." says Coach Diglio. The attention Katelyn gets can shield a lot of the pressure that her teammates feel at big meets and allows them to focus on what they need to do. At the same time, there are other incredible athletes at North Rockland who are very deserving of recognition for their own personal accomplishments. "This year both Nadia and Haleigh Morales are having tremendous seasons, and they often fly under the radar." says Coach Diglio. Thankfully the North Rockland team has a very "team-oriented approach, and individual attention is always secondary to team success. So far this has worked well for us, hopefully it continues!"

"My parents definitely inspire me," says Nadia. "They come to almost every meet, even if they have other plans. They work very hard and they are the people I will always look up to." she says. "Both my coaches (Coach Diglio and Coach Murphy) inspire me and help me reach my goals. Murph is a great coach and is very helpful," says Nadia. "Coach Diglio always pushes me to be better."