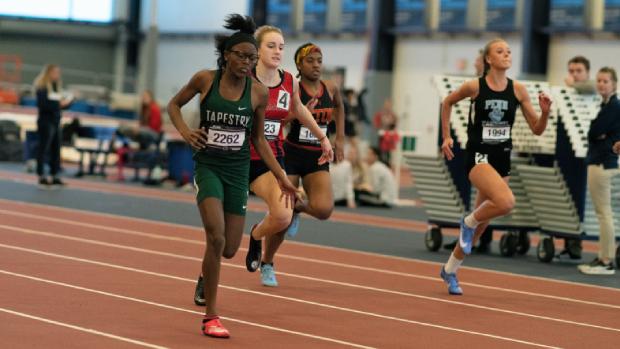 It was a big time run from the first time runner.  Jada Kenner (Tapestry Charter) may have the striking graduation date of 2024, but that doesn't stop the 7th grader from making waves at the State Level.  Running at the New Balance Games, Kenner broke one of the oldest records on the books, taking home the 7th Grade State Record in 7.28.  The previous State Record was held by Pam Jones (PS 120, Bronx) set way back in 1983.  It very well could be older than her parents!

Kenner has been on a tear this season, but is no stranger to the sport.  She grew up in the USATF Pipeline, with performances back to 2017 and beyond.

Kenner is currently the Section Leader for Section 6 in the 55m, which means she'll have plenty of opportunity to improve throughout the Post-Season.  For now, she's a name to watch whenever she steps on the line.

Congratulations to 7th Grader, Jada Kenner, on finishing 1st out of 80 girls and winning the Freshman 55m. Not only did she win, she broke the meet record and ran a personal best of 7.28 and ran the fastest time in WNY!!!!#GoThunderhawks!!!!! @MileSplitNY @bufnewspreptalk pic.twitter.com/gDmbKKAJgL