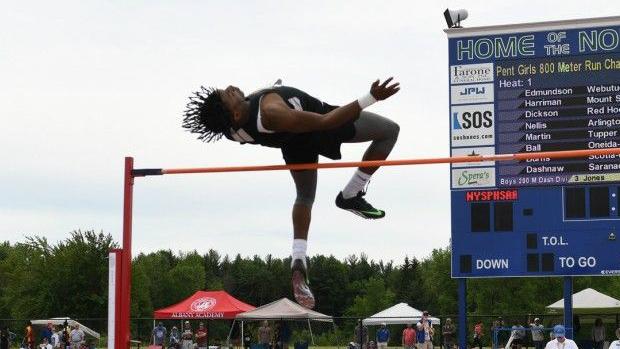 It was a Facility Record by two inches.  Not bad for a Saturday morning in December.

At the Oscar Jensen Holiday Relays, junior Kwamere White (Henninger) put the rest of the State on notice, with a 6-8 clearance in the High Jump.  He had done 6-7 Outdoors at State Quals the year before (only a sophomore), but that extra inch provided some history.

White's jump is now the highest jump clearance made by an athlete not from Suffolk County since 2014.  Section 11 on Long Island has dominated the event in recent years, many times sweeping the top three spots on the State Meet podium. Most recently, Dan Claxton (Smithtown East) cleared 7-1.75 to win the Title in 2017, with Vladislav Cullinane (Babylon) following up a year later with the win.

White only began High Jumping last spring, where he debuted a 6-7.  Had he cleared that Indoors, he would be a mere inch off Claxton's 6-8 Sophomore State Record.  The progression possibilities are there, and with a full season ahead of him, White has plenty of potential.

For now, he stands as US #2, and the current State Leader.