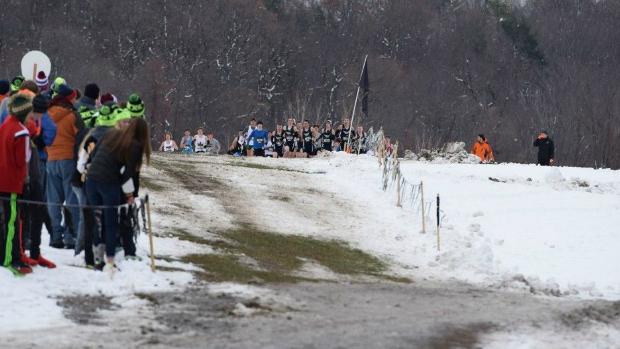 As a result of the winter storm and following the recommendation of the cross country organizing committee, the NYS Federation unfortunately has had to cancel the 2018 Federation Cross Country Championship at Bowdoin Park on Saturday, November 17th. It has been determined that the course will not be a suitable championship course for athletes and spectators. The meet will not be rescheduled this year.

This marks the first time the Federation Meet has been cancelled since the meet was called halfway through in 1987, for snowy conditions.  The meet was then held at Fayetteville-Manlius HS.  Once more in the 90's, the meet ran into snow issues, but was moved back a week, and contested then.

The Federation Championships began back in 1974, with the goal of uniting the four individual Federations within New York State.  With the inclusion of Girls in 1976, the meet has seen very little change in it's format.  The biggest alteration came in the early 1990's, as the meet was originally run as two races: one as a Team Championship & another as an Individual Championship.  They have since been combined.

The Saratoga Girls were slated to win their 24th Team win, after winning the NYSPHSAA merge the week before.   Katelyn Tuohy (North Rockland) was the defending Fed Champ, as well as the Course Record Holder, and a heavy favorite to win as well.

The Boys Race was set to be a little bit closer, as Saranac Lake was the top seeded Boys Team in the field.  It would have marked the first win for a Section 7 team ever, the highest previous finish coming from a 4th place finish by Saranac Lake back in 1995.  Individually, Colin Waters (Arlington) was the top seeded NYSPHSAA athlete, while Matt Payamps (Saint Anthony's) would give the biggest challenge from the CHSAA.