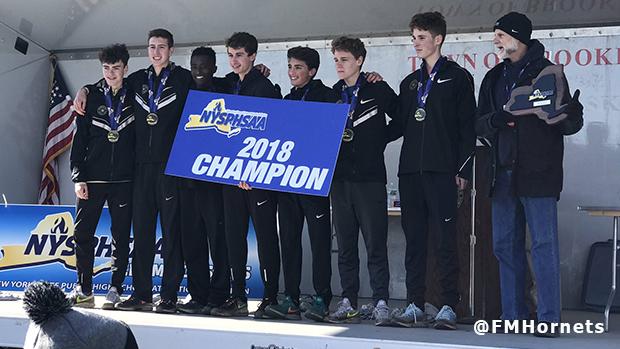 On Saturday, November 10th, the boys and girls of  Fayetteville-Manlius were once again competing for their own respective State Titles.  At Sunken Meadow State Park, a course none of the athletes had ever seen before, there was familiar voice among the sea of spectators.  That was Head Coach Bill Aris.

Once a year, we take an extended look at a coach of a program who has made an impact.  Since 2004, the impact of the Fayetteville-Manlius Cross Country team has been undeniable, at the State and National level. The boys and girls have combined for a total of 17 State Title wins in that time period, all achieved in New York State Class A, the most competitive division.  In addition, they have added 12 NXN-National Titles to their collection as well.

In 2018, the boys brought that total up to 18, in impressive fashion.  With 17-second compression, they scored just 25-pts. to win the State Team Title, the third lowest score for a Boys Team in State History.  Once merged with the rest of the Classifications, that score increased to only 34-pts., now standing as the lowest merge score in State History. They managed to put their Top 5 inside the Top 10 finishers of the race, team scorers or otherwise, as well as taking second overall individually in the race, making Geoff Howles the States' Top Returner in 2019.  In addition, Peyton Geehrer was the States Top Sophomore, and Yakob Kelley was the States second fastest Freshman.

For the Girls, it would be a narrow one-point loss to perennial power Saratoga Springs, the first in a string of 12 previous State Titles. But even there, saw improvement.  Their 2-5 compression was the tightest it had been all season.  Their lead runner, Claire Walters, would run the third fastest time in Course History, bettering the previous Course Record set by Aisling Cuffe (Cornwall) the same year she would go on to dominate Foot Locker Nationals.  And with such a narrow margin at both States and Sectionals, once again Manlius is right back in the conversation for performing well at Regionals with both teams.

We spoke with Coach Aris after the State Meet, on all things cross country.  We talked about how he has approached the season differently in 2018, the revealing performance of his boys at the State Meet, and how he builds towards the future after a big race.