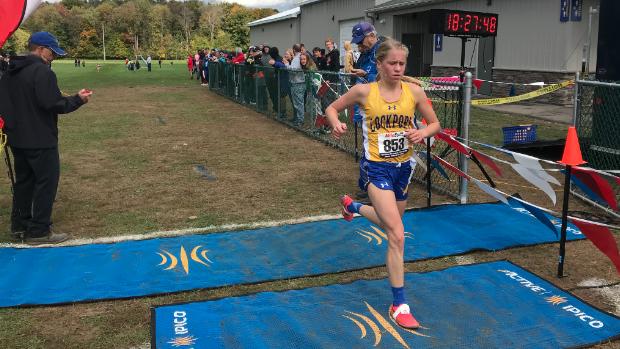 One of the most attended invite races in section 6 is the Bulldog invite, hosted by Alden, and once again this held true.  A platform for most coaches to get their teams top competition, on a honest, flat, fast course, normally two weeks prior to league championship races, and 3 weeks prior to sectionals seems to have an inherent value, and most coaches use Alden for that idea!

Arguably the most anticipated individual race of the day was in the girl's large school as Nike National Qualifier sophomore Sydney Nowicki from Lockport faced off against freshman Megan McLaughlin from the high powered East Aurora team.  Sydney made a point that she wanted to control the race, and the pace from the start, as she led through the first mile.  After last week at McQuaid, where Sydney fell off the leader in the middle of the race, Sydney made sure to not let that happen again, as she surged ahead just after the mile mark.  Megan tried to close the gap in the third mile, and succeeded slightly but Sydney was able to hold a respectable margin and cross in a very fast 18:29 to Megan's 18:48.  Megan's consolation was her East Aurora team looked better than ever, even without sister Maggie racing!  The girls from EA had 6 girls cross in the top 15, and only had 71 second split 1-5, in scoring a dominating 37 points in the 24 team field (to win by 66 over section 5 school Webster Thomas), and looking like they are very much ready for the post-season.

The boys large school race turned into battle number 3 between Armani Merlino of Lancaster and Thomas Appenheimer of Cardinal O'Hara.  Armani was able to pull away in the final mile to just edge Appenheimer by four seconds.  This is the 3rd very close race between the two this year, with Appenheimer edging Merlino by 3 seconds at Maple Grove, Merlino returning the favor by 3.5 seconds the next week at West Seneca, and then four weeks later at Alden we had a similar story once again with the race between the two, as they continue to pace the WNY crowd.  In the team competition Pioneer, ranked in the top 10 in Class B in NYS, was able to get by Clarence by 22 points-104 to 126.  Pioneer's 5th man placed 41st (junior Grady Regan), whereas the Clarence 5th man crossed in 51st.  Notably absent from the Clarence lineup was one of their top seniors Grey Conover.

In the boys small school Northeast from PA came up to battle the East Aurora.  Northeast's Josh Lewis ran the fastest time of the day in a very respectable 15:43, to win the race and teammate Zane Courtwright came in 3rd in the 16:28.  However the low places were not enough to hold off the strong pack of East Aurora who brought their first runner through in 4th place with a time of 16:32 (Nicholas Ebling), and their fifth runner (Colin Cassidy) through in 17:11 for 16th.  The tight pack of 1-5 gave East Aurora the win by 11 points over Northeast.  Their team average of 16:50 just outdid large school champion Pioneer's team average of 16:57 as those two continue to set up for their showdown at sectionals.

The girls small school race was dominated by Silver Creek.  Freshman Ellie Decker won her 2nd invite of the season (she won West Seneca earlier this year) by outdistancing Hannah Sullivan of Southwestern by 25 seconds.  Silver Creek placed their entire top 5 in the overall top 33, to just squeak by Mercy of section 5 by 6 points.  The pivotal points for Silver Creek were gained as they put 3 runners ahead of Mercy's 2nd girl.