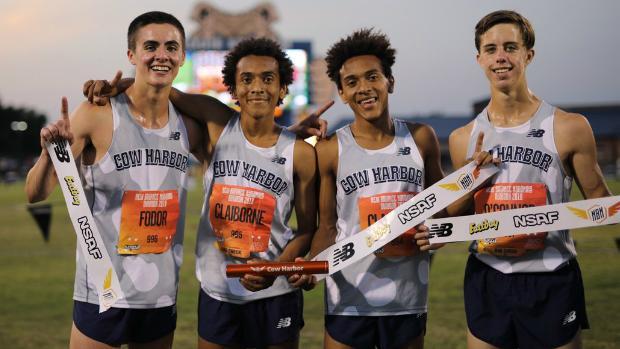 SELECTION OF THE ALL LONG ISLAND OUTDOOR TRACK AND FIELD ATHLETES

Plainview, NY - Representatives from the Nassau and Suffolk County Track Coaches Associations, NSCHSSA and USATF Long Island have come together to select the All Long Island athletes for the outdoor track and field season. Performances throughout the season were analyzed, debated and discussed with an emphasis placed on achievements in the championship meets (County/Intersectional, States, Nationals).

Three athletes were selected for each individual running and field event to comprise 1st, 2nd and 3rd team All Long Island. Athletes who could have qualified for selections in multiple events were assigned one selection in their most outstanding event, although some exceptions were made for athletes who were substantially ahead of the next possible selection. The committee has also awarded 1st, 2nd and 3rd All Long Island selections in the 4x100, 4x400, 4x800, shuttle hurdle, sprint and distance medley relays.

The 2018 outdoor track and field season was a tremendously successful one for Long Island and is highlighted by the committee's selection of three most outstanding athletes in the disciplines of sprints, distance running and field events.

On the sprinting side of the sport, the committee has selected Jaheim Dotson (Longwood HS) and Jada Obie (Hauppauge HS) as the most outstanding athletes of the season. As a junior, Dotson established himself as one of the best 110 and 400 hurdlers in New York State. He was a double Suffolk County Champion and All State selection in the events and finished in the runner-up position in the 110H at the State Championships (14.32). His season then culminated with a lifetime best 53.90 in the 400H at the National Championships to earn a silver medal in the Emerging Elite section. In her senior season, Obie was likewise one of the fastest runners in the state this past season. She was a double Suffolk County Champion in the 100 and 200, then went on to earn All State honors in both events as well. Her personal bests of 12.11 (100) and 24.96 (200) rank among the best in those events state-wide.

In the distance running realm, Mason Gatewood (St. Anthony's HS) had the fastest times in New York State this season in the mile (4:07.00) and 3200 (8:55.00). He anchored his 4x800 relay to a New York State Championship and finished just outside of All American position with a 7th place finish at the National Championships in the distance medley relay. Gatewood was also the winner of the prestigious Loucks Invitational 3200 race. On the girls' side, Reilly Siebert (Syosset HS) was the Nassau County Champion in the 1500 and Section VIII Champion in the 800 and 1500. At the New York State Championships, she placed 2nd in the 1500 with an outstanding 4:27.69 to establish a new lifetime best in the event. At the National Championships, this time competing in the mile, Siebert was 7th and just 0.03 away from an All-American accolade. She graduates as one of the most accomplished Long Island distance runners in history.

Finally, in the field, Steven Vasile (Commack HS) was a double Suffolk County and Section XI Champion in the shot put and discus. At the State Championships, he launched a lifetime best of 177-7 in the discus to emerge as the NY State Champion in the event. That measurement was also the furthest throw of anyone in the state this season. He then went on to the National Championships in the event and, with a throw of 168-8, placed 12th in the nation. Rounding out our most outstanding athletes of the season is Zaria Fuller (Uniondale HS). In her junior campaign, Fuller was a triple Nassau County Champion (High Jump, 110H, 400) to lead her team to the Nassau County Championship. She then completed her season as the Section VIII Champion in the pentathlon before finishing in 2nd at the New York State Championships.

We congratulate each of these six outstanding athletes on being named most outstanding in their discipline, as well as all of our All Long Island selections for the 2018 Outdoor Track & Field season.

Track and Field Athlete of the Year