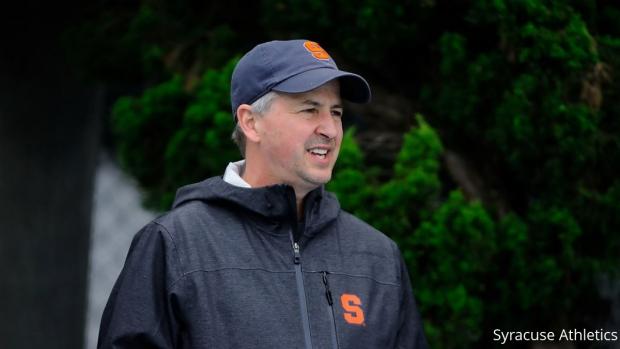 Syracuse announced on Thursday that head cross country and track and field coach, Chris Fox is leaving collegiate coaching to "pursue opportunities in the professional ranks."

Fox arrived at Syracuse in 2005 and transformed the school into one of the nation's top distance programs. The Orangemen won the men's cross country national championship in 2015.

Justyn Knight, Syracuse's most successful runner during this era, won two NCAA individual titles. Knight most recently took second in the NCAA Championships in the 5000m, his final race for the university.

In total, 67 of Fox's athletes earned All-American honors in either cross country or track and field.

"My time at Syracuse has been tremendous. I am not sure I can ever express my thanks to the administration for this opportunity at Syracuse," Fox said in a release by the university.

"The young people I was fortunate enough to coach were the very best; however, I have an opportunity in the professional ranks that I could not refuse. I thank everyone involved with Syracuse Athletics for what was accomplished."

No details have been provided yet as to where or who Fox will coach professionally.

Syracuse's athletic department said they will begin a national search for Fox's replacement. Brien Bell who has coached at Syracuse with Fox since 2005, will be the program's interim head coach.