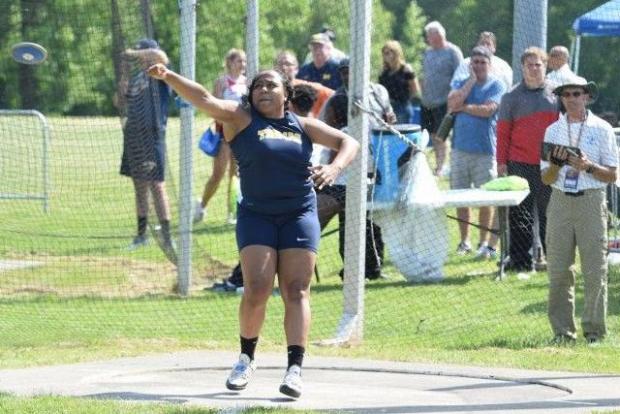 It's time to give the throwers their big due, if for no other reason than that I don't want them targeting me next year with their weapons of mass destruction like the javelin, hammer, and discus when I'm out in the field trying to mark their big heaves.

The Weightathlon ThrowDown (WTD) gives the 2018 NY throwers the chance to win the Gold Ring prize in a variety of contests of hurling heroics involving multiple events. And though the WTD may not be exactly on the same page as a rap or dance throwdown, after seeing the spins of some of the hammer throwers in the ring or certain victory celebrations at the Loucks meet this year, we can definitely say that the NY girls have all the right moves.

The girls are indeed up first after a year of some very nice achievements. The WTD pulls in the throwers' best marks of this year and rates them according to the IAAF scoring tables for combined events like the decathlon. We've picked out four contests of 20 athletes each for the WTD that include a nod to the indoor season for the shot put and weight throw combo event from the winter season, then a homage to the chief dual-season event with a double-up of the indoor and outdoor shot put marks, then a triathlon compiled from any three of the four main outdoor throwing events, and finally the exhausting full shabang quadrathlon of the shot-discus-javelin-hammer marks for the small pack of athletes who did them all.

Sorry to the outdoor weight throwers, but there's just not enough competition outside yet, and most of this year's results came from one meet in Section 9. And yes the turbo javelin has shown some explosive growth among PSAL athletes, going from three listed results last year to 29 in 2018, but it's still not pulling enough weight for a WTD entry yet.

How will the shot and discus state champion Samantha Morillo of Valhalla or hammer national runner-up Monique Hardy of Webster Thomas do here? Only the WTD tables on the following pages can say for sure, but the cover photo probably gives a hint. Still, there's a lot of athletes throwing their caps in the ring, and one great mark can help put you at the top. As a sign of the changing times, five years ago NY MileSplit listed 398 girls with marks in the javelin, and this year the total grew to 533. 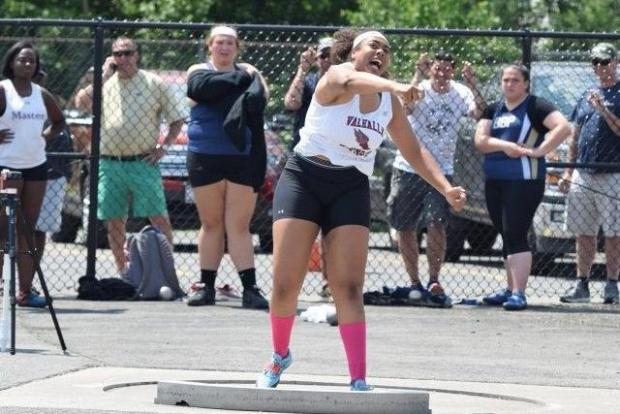 The WTD creates the scores for the four events using the invaluable Throws Pentathlon app provided by the Cheshire County Athletic Association (UK), that is based on IAAF scoring guidelines for athletes of different ages and genders. High schoolers are classed at the Senior level for athletes in the 17-34 age range. The scores mirror the system used for the OCIAA Throwing Pentathlon meet held at Monroe-Woodbury in mid May and won by Minisink Valley's Ashleigh Convery. That pentathlon added the outdoor weight throw to bump the events up to five, but outside of Section 9, very few throwers tossed the weight outdoors and the marks there were far behind indoor season.

Why not just add up the feet-inches marks in all the events to rank the throwers? Mainly because the shorter marks for the shot put place it at a disadvantage to the discus, javelin, and hammer throw. Morillo's top shot put mark was 3 inches further than Solvay's runner-up Ashley Bosco, but Hardy's top hammer toss was 22 1/2 feet ahead of Mount Vernon's Jannah Sharpe in the second spot.

Inserting an event for the combined shot put not only recognizes the only weight event that is commonly done both indoors and outdoors, but also provides an opportunity to shine for a large number of throwers mainly from upstate (north and west of Section 9) that do just the shot indoors and the shot and discus outdoors.

The closest competition tends to come most often in the shot put both at the state and national level since it is the event that has the greatest number of competitors, and really big throws that put a big gap over the rest of the field are more likely in a far-chucking event like the hammer throw. There are obviously exceptions to that rule though as last year NJ athlete Alyssa Wilson just crushed all US shot putters with her national record throws (she also won some national championships in the discus and hammer throw). For NY athletes this year, Monique Hardy's huge hammer throw at NBN was the biggest point-getter in any event. The javelin on the other hand had a big drop off at the very top in NY and handed out the least points to our WTD field. This year's top javelin toss came from New Rochelle's Olivia Morgan, who is known more as a hurdler, sprinter, and long jumper and for her all-around abilities in the pentathlon and heptathlon.

The results for the WTD's four contests show just the athlete's scores and not the converted metric distances that the scores are based on. Any athlete who feels that their massively big throw in the javelin or hammer throw was not given enough credit should take it up with the IAAF and not take it out next year on any unfortunate official they see standing with a marking stick at just about their PR distance.