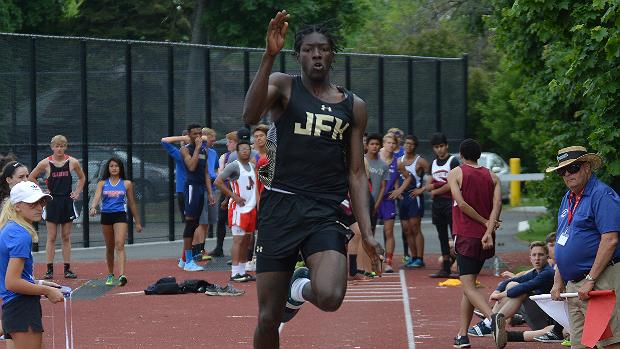 It was a busy day up in Buffalo this weekend, as the Western-most Section in New York has finally thawed out.  And with that reprieve came the top performances they had been just waiting to display.  We already mentioned the Pole Vault Class State Record, but here are a couple others that are more than noteworthy.

We Get Our First 60ft Throw Of The Year

The streak lives on!  While John Surdej (Lancaster) may have technically already  joined the 60-foot Shot Put Club (he threw 61-6 in a local dual meet last week), he solidified that status with a win at ECIC's.  There, he put the shot out to a 61-0.5 distance, marking him the new NY #1 performer.  On top of that, he gets to add his name to the long list of those who had done so over the years, and now extends NY's Streak of 60-foot throwers to a current 9-Year-Run. The mark also makes him the 4th best thrower in Section 6 history.

Allen Making Waves In The Jump's

It may seem strange for an athlete who grew up in Montego Bay, Jamaica to choose Buffalo as the place to be, but that's exactly what Shevaughn Allen (JFK Buffalo) opted for two years ago.  The decision paid off, as he is set to contest the Decathlon next year at the University of Buffalo.  On Saturday, among other events, Allen won the Long Jump in a mark of 24-1.75.  While the mark can not count for record purposes (no wind-gauge was in use), the mark was a significant best.  Allen is the defending D2 State Champion in the Triple Jump, but also has scored 3,124 points in the Pentathlon, which makes him a real contender there too, maybe even for the Federation Title.  We'll find out which way that goes at next week's qualifier.