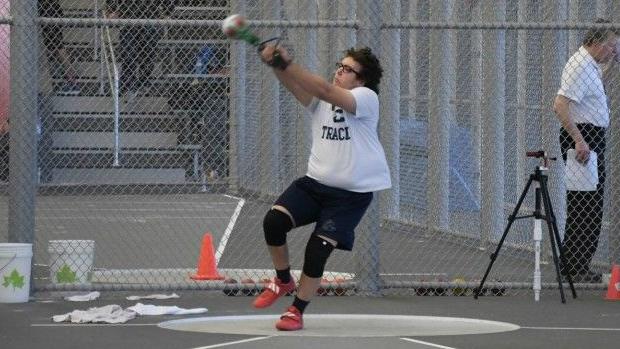 The Javelin and the Hammer Throw are two notable missing events in the State Track and Field Meet Line-up.  As such, the events have fallen out of favor for most coaches. It's a strange choice.  Both of our neighbors in NJ and PA throw the Javelin at the State Level, yet PA still believes they can only handle the 300H distance, and neither feel Steeple is appropriate at the HS level.  New York is still a leader in both disciplines.

Anyways, as these events have fallen to the wayside, it is up to individuals to keep them alive.  Paddy McGrath, a 2000 Sydney Olympian, is doing his best to do just that.  McGrath was an Irish Hammer Thrower, and has put together one of the most consistent groups in the Northeast.  Year after year, State and National leaders in the event come from his group.  In reality, it may be the only real place to train or compete for the event in the entire state.  McGrath is the coach of State and National Record Holder Rudy Winkler (Averill Park), who now competes for Rutgers, and made the Olympics last Summer.  McGrath knows what he's doing.

Flash forward to 2018 and we have a new addition to the list of prominent throwers from his group.  Competing at McGrath's own USATF Hammer Throw Event, of which are held weekly at his own private Throwing Circle in Wallkill, senior Joe Benedetto (Burke Catholic) has had a breakthrough that had been a long time coming.  On his final attempt of the series, Benedetto unleashed a throw of 68.02m to win the competition.  That mark translates to 223-2 ft., good for US #2 behind sophomore wunderkind Trey Knight (Ridgefield, WA), who has a 228-6 mark from early May.  The mark is also the second best ever by a Section 9 athlete.

Once again, a member of McGrath's small fraternity of throwers (his group also includes top female athletes) has broken onto the National Scene, despite the event not being competed at the State Level, and with minimal Invitational opportunities year-round.  It's a testament to the groups dedication, despite the odds.  Javelin doesn't see the same success as the Hammer Throw, because there is no McGrath. All it takes is just one dedicated coach, and the results will come.