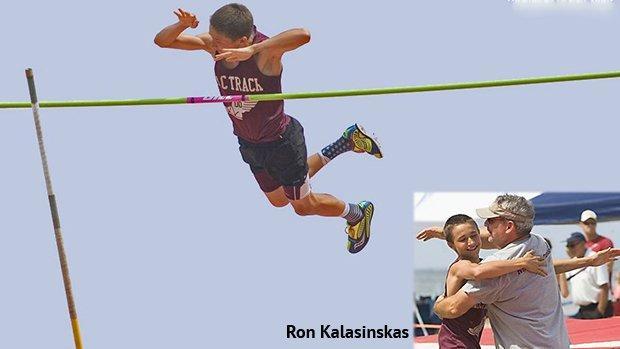 It's been a busy few weeks for 8th Grader Kegan Mancabelli (Orchard Park).  It was clear he was knocking on the door for following up his 7th Grade State Record in the Pole Vault when he had a near miss at 13-0 during a rainy Loucks Games, but it wouldn't be until the skies opened up back home that the mark would become official.

Heading back to Orchard Park, up in Western New York's Buffalo area, Mancabelli would clear 12-11 at a duel meet Thursday evening.  With the mark certified by two independent officials, the new clearance would count as the new 8th Grade State Record, surpassing the previous mark held by both Shane Racey (Ravena) and Donald Jones (Albany Academy).  Both marks were recent additions, added in both 2015 and 2016.  The pipeline is clear for Mancabelli - both of those athletes have gone on to be competitive at the State Level in the event, Racey setting the Freshman Outdoor Record and Sophomore Indoor Record as well.

If that wasn't enough, Mancabelli would come back on Saturday afternoon at the WNY Carl Roesch Invitational, and clear 12-9.25 to once again surpass the previous State Record.  His 12-11 clearance makes him the 5th best Middle School Vaulter in the country, trailing leader Jake Davidson of Lloyd Memorial, KY with his 13-6 mark.  Mancabelli has a few more chances to increase his Record, and he stands as the top D1 vaulter in Section 6.  In the year of the Pole Vault, the action is only heating up.