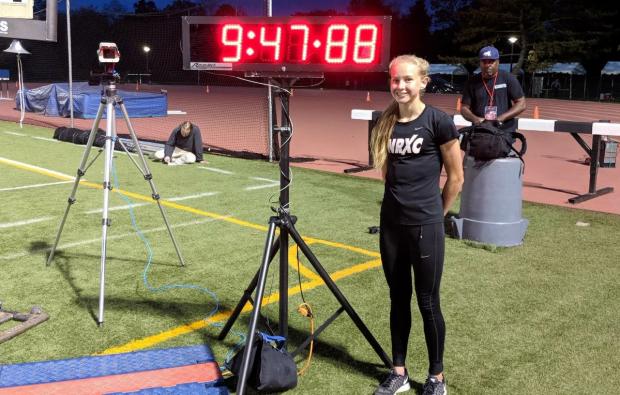 White Plains, NY - As usual, the Loucks Games provided some of the best races in New York State History, only adding to the meet's already storied history. Carrying most significance were the 3200m's, as the races have turned into the premier events for Spring Track on the East Coast.  While the Boys field was impressive, with six guys under 9-mins led by a 1-2 team finish, it was the girls rendition that would make National headlines.

It was set to be another duel between NY's top preps, but with an opening mile pace of 4:45.95, sophomore Katelyn Tuohy (North Rockland) had already broken the field that included defending champ Kelsey Chmiel (Saratoga).  After that first 1600m, the pace slowed from 71-seconds a lap to 75-seconds, but the blistering pace would be enough to snatch the record.  Tuohy charged down the backstretch to just dip under the previous National Record set by Kim Mortensen (Thouand Oaks, CA) at 9:48.59 back in 1996.  Tuohy crossed the White Plains finish line at 9:47.88, which also surpassed the converted 2Mile National Record set by Brie Oakley (Grandview, CO) last year, running a converted 9:47.92 at the Brooks PR Invitational.

In addition, the mark erased the previous meet record held by Aisling Cuffe (Cornwall), set in 2011 at 9:56.16.  Obviously, the mark also broke both the State Record for the event, as well as the Sophomore National Record.  The time stands as Tuohy's second Individual Overall National Record, adding to the Indoor 5000m set at the VA Showcase.  Tuohy had also been part of the Indoor National Record DMR, before that mark was broken by Lake Braddock the following year.

After the race, Tuohy expressed a slight disappointment in her time, although she was excited to have broken the record.  Despite the fast time, she mentions that her workouts had indicated a faster result, and that may have be achieved by having closer competition.  Despite the laments, Tuohy's coach Kyle Murphy was elated, telling the Journal News,

"I think it's phenomenal," Murphy said. "She was going to get a feeling she never had before, running that kind of pace. You never know what will happen. But she felt it and kept pushing through."

Tuohy has run many of her races solo this year, including much of Cross Country, as well as her 5000m National Record Indoors.  Such is the result of being so ahead of your peers in certain disciplines.  It would seem that only when she drops down to the shorter distances in the Mile, 1000m, and 800m, do the fields become more relevant (more on that later).

Editor's Note: Tuohy came back a day later, and won the mile uncontested at 4:45.61.

There still remains a lingering question about another aspect of the race.  Tuohy was clocked by a certified official at 9:10.4 for the 3000m, which would break the previous National Record set by Kelsey Chmiel last year at the Eddy Meet.  However, a hand-timed, en-route National Record is unprecedented, and its efficacy is still under debate. With the advent of FAT-timing in the modern era, Hand-Time National Records have been essentially relegated to the past.  Even then, hand-timed marks required three, independent stop watches clocking the race, with the slowest figure of the three being used as the official time.

This is further complicated by the fact that we now have video of the race as well.  It allows us to re-watch, and re-time a race. However, setting the precedent of hand-times via video replay would alter the accuracy of the current State All-Time listings.  Mikey Brannigan (Northport) split 8:10 for 3000m at Loucks in 2015, based on video evidence, but that mark was not included in the All-Time List's either. Do we make an exception now?

An update can be expected later in the week. 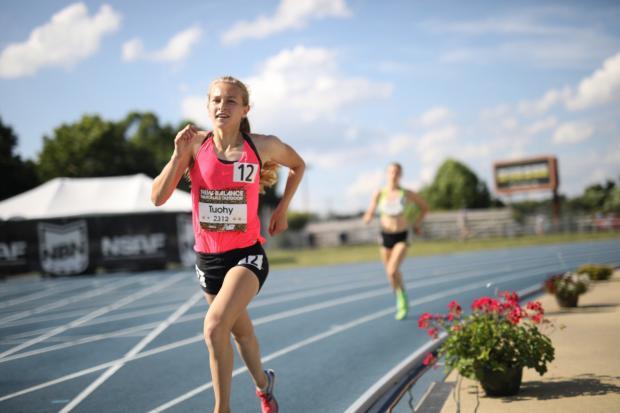 The easy solution to Tuohy's lack of competition is to seek out a faster field.  This would come in one of two ways: a Professional race, or an International race.  While entering in the Prefontaine Classic in Oregon to get exposure to Pro running would conflict with Tuohy's Sectional Meet, the latter option is much more doable.  2018 is an IAAF World U20 Juniors year, and Tuohy now having turned 16, means she is eligible to represent Team USA (Tuohy was not eligible to represent Team USA in Edinboro for the XC Champs in February because she was still 15).  However, therein lies another conflict.

To  qualify to represent Team USA at the IAAF World U20 Juniors, she would first need to qualify at the USATF Track and Field Outdoor Junior Championships on June 15th-17th.  That lies in direct conflict with New Balance Outdoor Nationals, where Tuohy has attended the past few years, as well as the indoor incarnation.  Not to mention many schools hold their Classroom Finals that same week as well.  Depending which event she would look too, attending one meet would exclude the other.  Better competition would be in Indiana, the home of the USATF Champs, due to the inclusion of College Freshman and Sophomores, however, relay success would lie more in North Carolina, where North Rockland has dominated the distance relays.

The predicament offers a unique decision for the elite athletes of HS. 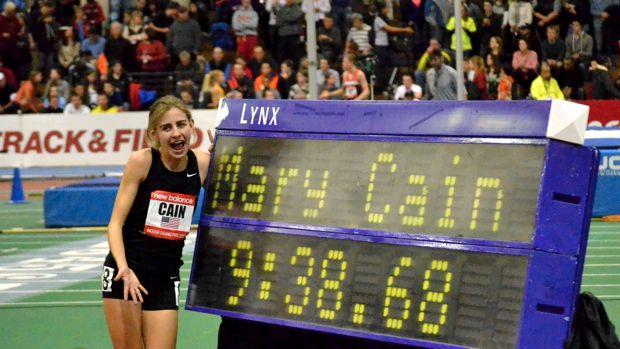 By nature of the sport at the HS level, the inevitable comparison to Mary Cain continues to permeate the conversation online whenever Tuohy runs fast.  It can be a dangerous line of discourse, as it puts unrealistic expectations on a young athlete, as a Sophomore Tuohy is compared to a Senior, Professional athlete, in Cain.  The dialogue usually boils down to the overly-simplistic questions: Has Tuohy surpassed Cain?

The quick and easy answer is no, but there is a direct issue with the question itself.  Personally, I think the answer should be, "Who cares?"  However, for the sake of argument, I'll try and draw a clear distinction.  Comparing the two would be as if you were to compare a crocodile and an alligator.  On the surface, they may look incredibly similar, but in reality, they are entirely different animals.

Taken in that context, Tuohy has already surpassed Cain.  Tuohy's 2017 XC campaign may have been the greatest in prep history.  Not only was it record breaking, but it was consistently so.  Amber Trotter may have run a faster Speed Rating at Foot Locker, but she was not as consistently dominant throughout the entire year.  Tuohy has surpassed almost all of Cain's marks in XC, and by significant margins at that.  On the track, Tuohy may be as equally as dominant over the longer distances.  She carries a 5000m record that betters that of any mark by a prep Indoors or Out, including one previously held by Cain. Tuohy did much the same in the 3200m distance at Loucks, solidifying herself as one of, if not the best, long distance runner of All-Time.

The discrepancy here is that Cain never wanted to be that, nor did she really ever try to be.  Much is lauded about Cain's record of 9:38.68 in the 2mile, which converts down to 9:35.32 for the 3200m.  However, many people forget the context of the race.  It was a throwaway race, run Indoors, amidst heavy training, in a professional field known to run tactically.  The 3200m/2Mile was a distance she only ran once in her career, not peaking for it, and using it as a fitness stepping stone to her real goal: the 1500m.

The Purdy charts can give us a better indication of what a hypothetical Cain could have run for 2Mile's.  A conservative conversion would put her at 9:25 for 3200m, focused training maybe even pushing that down lower.  However, Cain was more focused on the shorter distances, clocking 4:04.62 for the 1500m, 4:24.11 for the Indoor Mile, and 1:59.51 for the 800m.  Realistically, had the mile been more popular at the Olympic level, she might have lowered that Indoor best even more.

Cain was an Elite athlete, high school aged, with arguably the best distance Coach in the world, and professional fields to aid her marks.  Had the schedule lined up more favorably, Cain was a legitimate threat to make an Olympic Team, for more reasons than just her Personal Bests.  She was beating Olympians with an unparalleled kick.  Cain's Mile time is still better than the NCAA Record by 5 seconds.  Her 800m time would be the fifth fastest ever in the NCAA.  Her 1500m would be #2.  Quite simply, the marks are unparalleled.

By contrast, Tuohy is a high school runner, competing in local venues. Many of her races are nothing more than glorified time trials, through no fault of her own.  She is doing exceptionally well, and nothing should be taken away from that by an apples-to-oranges comparison.  And this is where the danger in comparison comes.

For Tuohy, racing in High School is simply about putting down fast times.  For Cain, the fast times were more a by-product of trying to win the race.  That distinction makes any comparison simply based on personal bests a futile effort.  Any coach that has seen both athletes run in person at their prime, knows that these two athletes' approach to racing couldn't be more different.  The times don't tell the full story.

One athlete's success doesn't detract from another.  Records are kept to provide perspective, but they do not tell the whole story.  While Jim Ryun's HS Mile record has been broken a few times over by now, it doesn't detract from that performance in the moment.  Likewise, the importance of Tuohy's marks aren't lessened by those of Cain.  In reality, the pair should be seen as a compliment to each other. Tuohy may be considered the Greatest Long Distance Prep Ever, while Cain can lay claim to the Greatest Middle Distance Prep Ever. 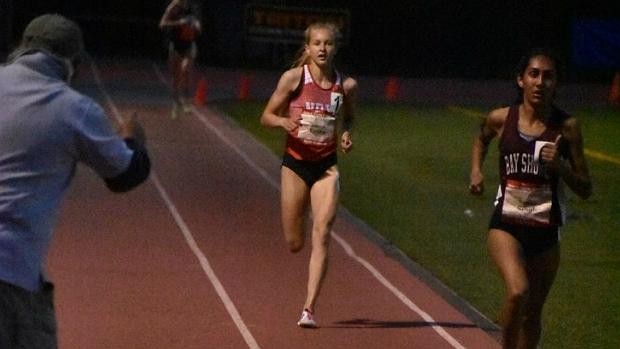 On Friday night, we witnessed one of the "Great" performances in Track and Field history.  It's not something that should be flippantly discarded by unnecessary comparison's, or "what if's".  Too many times, the remarkability of a performance can be diluted by postulations about what the mark indicates for ten years down the line, rather than an appreciation for what that mark means in the moment.

Katelyn Tuohy is a exceptional athlete, and her exploits make for compelling Track and Field.  For many in the stands that night, who had stayed specifically to watch the race, the allure of a "Great" performance was too good to pass up.  As Katelyn crossed the line, athletes in attendance and across the country saw something to look up to, to strive for.  That sentiment is at the heart of High School Track and Field.  Records are made to be broken.  But we shouldn't let the pursuit of them detract from the experience.  Sometimes it's better to enjoy a race for what it is, rather than what it means.