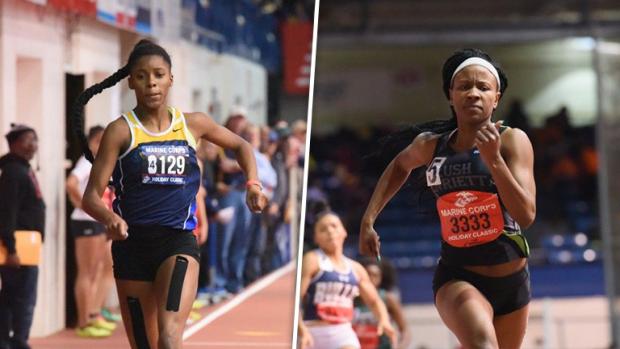 It was no small feat. In a meet that had three of the top girls sprint programs in the country over the past decade (Western Branch VA, Bullis MD & Paul Robeson NYC), two girls from Rochester dominated the sprint events at the Marine Corps Classic.  Lanae-Tava Thomas (Rush-Henrietta) and Vanessa Watson (Spencerport) won every event they entered in, by dominating fashion.  Three new US #1's, and another US #3 on top of that.

Lanae Is Looking For Two 22's

The senior from Rush-Henrietta has made her intentions clear this year.  22-feet in the Long Jump, and 22-point in the 200m.  While that may be a lofty goal for most, Lanae-Tava Thomas (Rush-Henrietta) has proven to be a force in both events.  Last year, despite being hampered by a hamstring pull for much of the indoor season, she still clocked a 23.66 and 20-11 jump last year.  She improved upon those Outdoors.

At the Marine Corps, Lanae jumped out to 20-2, an inch improvement on her previous Season Best of 20-1.  She's showing consistency here, which will lead to bigger jumps deeper in the Season.  Even more impressively, she hopped on the track afterwards, and clocked a NY #3 All-Time performance with a 23.87 in the 200m final, beating out every girl from a loaded Bullis team.

Although Lanae only did the two events, she could have won the 55m final if entered as well.  Picture this.  The winning time was 7.17.  In all three years of High School, Thomas has never clocked slower than a 7.12 in a 55m final in her lifetime.  She's never been over 7.10 since freshman year.  That would give Rochester the win in the short sprints, 55m, 200m, and Long Jump.  But what about the upper half?

Rochester Has Another Watson To Watch

When you hear the name Watson in the Rochester area, the obvious first thought is Thomas' former teammate, Sammy Watson.  But over the years, there has been another Watson running up at RIT.  Last year, as a sophomore, Vanessa Watson (Spencerport) took home 4th place in the Indoor 600m and Outdoor 400m at the New York State Championships.  She already has a state title in Soccer, winning one in 2016, but her goal is to grab the individual honors on the track.

Watson trains with Lanae-Tava Thomas sometimes at RIT, pushing together during workouts.  The efforts show, as the Junior is now US #1 for the 400m distance, ahead of some top talent around the country.  She's dropped Soccer in the fall, committing to training for the track, and the future looks bright.

Watson took home the win in the 300m and 400m distances, completing a sweep aided by her training partner.  Her goal is now to look at that 600m National Record, set by Sammy Watson last year.  Watson's Junior Class State Record of 1:29.53 may be the more immediate target, as Vanessa carries a 1:32.76 personal best into her season.