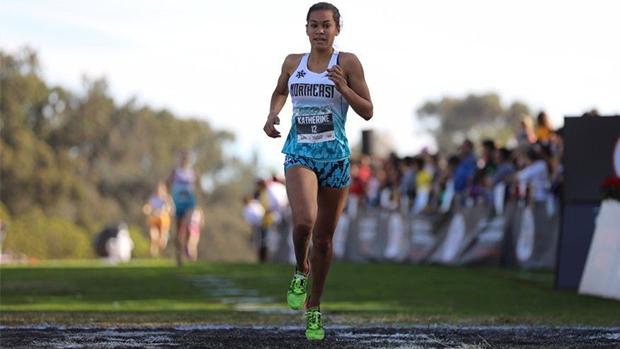 Exactly one year, and one week prior, Katherine Lee was part of the greatest Individual Qualifying team for Nike Cross Nationals, which included household names like Kelsey Chmiel, Jessica Lawson, Katelyn Tuohy, and Amanda Vestri.  All four of her individual teammates would go on to podium at Indoor or Outdoor Nationals, only Vestri not taking an individual gold medal (she took 2nd in the 5k Outdoors).

Lee placed 10th overall in that race at NXN, after one of the most controversial At-Large snubs of her team's 3rd place finish at NXN-NY.  Flash forward to 2017, and Lee is now on the line in San Diego as an individual, at the Foot Locker National Championships.  Powering through the finish line, she would take 4th overall, in her best XC performance of the year.  Not only was it a triumph of spirit, having to train all by herself after her record-breaking relay partners had all graduated last year, but it was also a triumph on the record books.

Lee is now the highest-placing, combined finisher at the two XC National Championships.  Prior to Lee, Jess Lawson held the mark, taking 11th at Foot Locker in 2015, then taking 8th at NXN in 2016.  The list of dual championship athletes include many from the early years, where there wasn't a regional.  Nicole Blood and her Saratoga team come to mind.

Lee's time of 17:38.3 is also the 6th fastest ever run by a New Yorker on the Foot Locker course.  It was also the 6th time a runner from New York had taken the 4th position since the meets inception.

Now, Lee moves on to the track, where her season will be much more focused on the Individual Events.  Last Spring, the Georgetown signee had expressed an interest in the open 800m.  Not a bad endeavor, after splitting 2:04.5 last spring on the anchor leg of her New Balance Outdoor Nationals winning 4x800m.