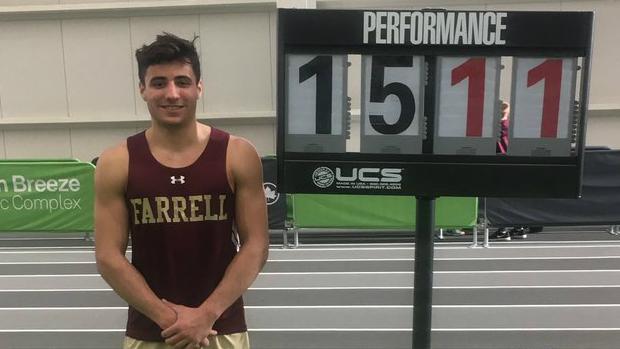 It's been a busy early season for the Pole Vault discipline.  We've have Johannes Stromhaug clear a new Sectional in November, we've seen reigning State Champ Erica Ellis leave her High School Team, and now we have a new HS Facility Record in the event for Ocean Breeze.

At the Staten Island Relays, Monsignor Farrell Senior Charles Crispi opened his season with a new personal best of 15'11.  His previous personal best indoors or out was 14-9, which ranked him as the 4th best returner heading into the season.  Technically, that rank would be third, as foreign-exchange student Anton Kunnas has returned to Finland.  We've yet to see the opening debut for Indoor Top Returner, Colin Duignan of Fordham Prep.

Crispi's mark is significant.  It is the highest mark ever recorded before December 17th, and makes him the 5th highest December Vaulter of All-Time (monthly recorded marks only go back to 2003).  The mark makes him both NY State and US #1 in the event so far this year.  Stromhaug jumped his mark in the rare November Invitational, making him the highest Vaulting athlete ever, for the month of November.  Expect the rivalry to continue throughout the season.

Congrats to Charles Crispi over 15'11" on a soft pole! Starting out his last indoor season with a win and meet record! BIG BOOM!!
The best is yet to come... pic.twitter.com/XF6x1eBZ1s