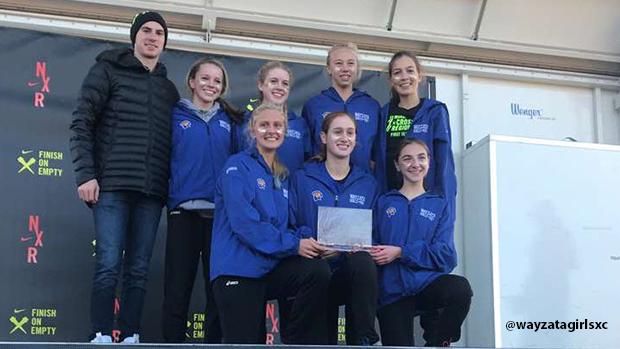 Welcome to the first edition of three Speed Rating Regional Merges.  These are the direct sequel to the previous Speed Rating National Merges.  The numbers are produced by TullyRunners, and are an objective way to compare performances at NXN-Regionals.  The thoughts below are my own, and have no real effect on the At-Large committee's decisions.  Being the NY webmaster, it interests me to research how NY teams might fare in the post-season. Take them with a grain of salt, or even less if you disagree.

Four At-Large teams are selected, by gender, each year.  The general consensus on selection is based on how you perform at your regional, as well as your season résumé against other nationally ranked teams that qualified.  At-Large guesses are just that: guesses.  They liberally assume that teams will perform at a standard level at their respective Regionals as to how they have performed all season.  By looking at Regionals that have already passed, it's clear that the top ranked teams don't always perform as such at the meet, so these could wildly change.

Quick Thoughts On Auto's So Far

Girls - Wayzata girls put in the second best single day performance of the year, only behind FM (Great Oak bests them on compiled season Speed Ratings).  They have a sixth girl who can displace many others' fifth, and are a team with a proven peaking system (They won NXN in 2013.)  They are a major contender with a repeat performance.

Boys - It will be interesting to see how the ranks expand as more Regionals are score.  Wayzata is second to Downers Grove North, but with Wayzata's low stick up front, that score should get closer as more displaces are added.  The general consensus of the Top 3 Boys Teams (Loudoun, Great Oak, Springville) have yet to race.

Quick Thoughts on At-Large's So Far

Boys - A very interesting setup.  Crater has the résumé for an At-Large, ranked Top 15 in numerous national lists, but may not have the regional performance, based solely on Speed Ratings.  Lyons Township has the best Speed Ratings of the At-Larges so far, but they had a fifth place showing at States on their résumé.  I would imagine the At-Large scene won't be clear until after the NY and SE race.  FM beat Green Hope at Manhattan, but Corning did not (albeit without their #1).  How those three teams finish at their regionals could have an effect on At-Larges.  Also, the Southwest has traditionally had strong teams.

Girls - Like the boys, Midwest third Barrington had a rough showing at States (8th merge), but came back with a decent third at Regionals.  The Speed Ratings put them as one of quite a few teams who have run those marks this year, so they seem like a potential, rather than a lock.