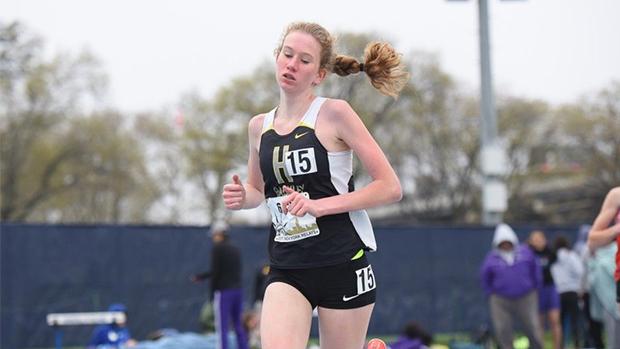 Olivia Curran (Hackley) ran 19:02 over the five-kilometer course, a solid race but not necessarily a time that jumps off the page, especially since the Hackley junior noted humbly that "it was a pretty flat course".

The thing is, that time was run after swimming 750-meters (almost a half mile) and biking 20-kilometers (12.4 miles). Curran, a junior world-class triathlete was on the third leg of the world championships in the triathlon when she ran that 5K.

"Triathlon is a bit like cross country in that every race is different because every course is different," Curran said. "I usually focus on time on the 5K part of the race, try to stay over twenty miles per hour on the bike, and swim around eleven minutes."

Curran placed sixth at the ITU World Triathlon Grand Final in the 16-19 Female AG Sprint Age Group on September 17th. Her time of 1-hour, 12-minutes, 40-seconds was good enough to be the third American finisher and was less than a minute and a half off the winning time of 1:11:12 by Jasmine Eden Gray of Australia. 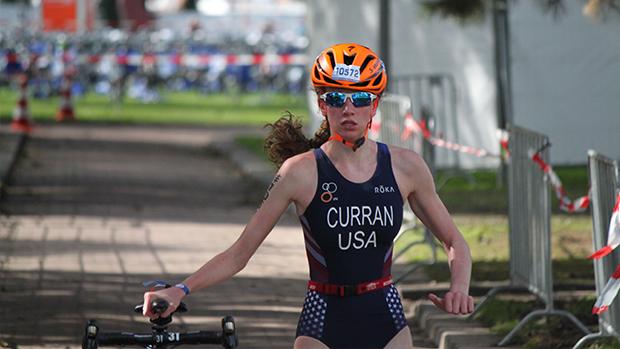 The race took place in the Netherlands, in the city of Rotterdam, and was the first such experience for the White Plains resident. While Curran has been taking part in a number of competitions since she was younger, it was only in recent years where she has begun to take her training to another level.

"My dad is a big racer. He's done a lot of Ironmans," Curran said. "We got into triathlons at a young age, competing in the kids races at competitions that my dad competed in. I started to take it a little more seriously in middle school."

Curran was recently named All-American for her success over the past year in the triathlon. She credits her father, as well as her brother Tyler as being instrumental to her success. Tyler, four years older than Olivia, took a similar path to triathlon success, qualifying for the World Championship when he was a junior in high school as well.

"He went through this entire process four years before I did, and after watching him, I was more interested and motivated to do the same thing once I reached that age," she said. 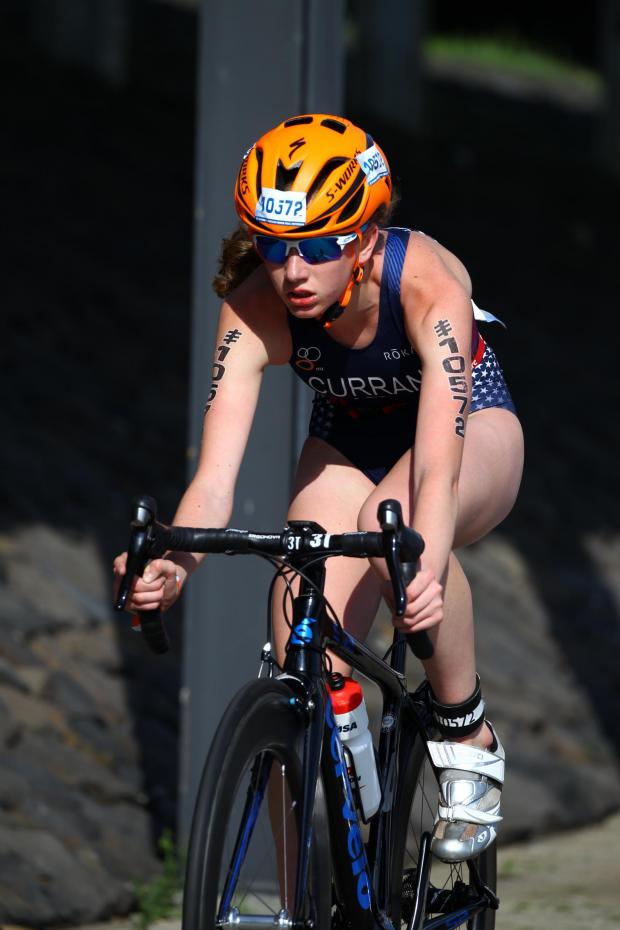 Curran primarily focuses on training for triathlons in the summer months when she has the opportunity to do all three specialties without having to worry about them interfering with her current season of competition. A three-sport athlete, Curran competes in cross country in the fall, swimming in the winter, and track & field in the spring.

"When it comes to triathlon, even though I enjoy it a lot, my priority is running," she said. "I follow my coach's training program in the fall and focus on running."

That focus got her off to a good start as a young runner. In her first varsity cross country season as an eighth grader at Hackley, Curran had two invitational top ten finishes and followed up that season with a freshman campaign that was much improved. She placed in the top ten six times in invitational and championship races as a frosh, including three top five finishes.

With high hopes heading into her sophomore season, something was not right. After running what were arguably the two worst races of her career in September, Curran went to the doctor.

"After the second meet, I realized I was anemic," she said. "I started taking iron pills and began to feel a lot better."

That started to show on the cross country course at the Brown Invitational where, despite running slightly slower than the prior year, she started to look and feel more like her normal self when racing.

Then she had her breakthrough.

After Brown, she experienced the first championship victories of her young career. Curran was the Ivy Prep Champion, running 15:41 over the 4K course at Van Cortlandt Park, leading her team to a one point victory over Poly Prep Country Day.

Curran followed up that performance with a NYSAIS Championship, her time of 20:12 on the 5K course at Van Cortlandt was the best of the 147 runners in the field and qualified her for the Federation Championship at Bowdoin Park.

With those individual championships behind her, Curran entered this season with high hopes.

"Because I was training intensely for triathlon over the summer, I knew I had a good base for running and had more confidence coming into the cross country season more than ever. Going into that race, I definitely had my goal set on winning," she said.

That race, the Somers Big Red Invitational, saw Curran run 19:53 on the hilly course, good enough for a 26-second victory to start her season. That, followed by her performance at the world triathlon championship the following week had her excited for things to come.

Unfortunately, she suffered a setback.

A week after returning from Europe, she suffered a strained muscle in her lower left quad during an easy four-mile shakeout run. So it has been a lot of cross training, mainly biking, to do her best to keep her fitness intact. While she was still sore a couple of weeks ago, when going out one day to test the leg, she continued to have her eyes set on achieving her goals this season.

The defending champion in both her championship meets from last year, Curran was looking to try and get healthy to participate and make her way back in those races. Having missed out on the Ivy Prep Championship, she has finally gotten some training in over the past week and is looking to a positive end to the season.

"My leg is almost 100 percent now so I'm looking to run at NYSAIS this weekend," she said. "I'm not in my best shape, but I'm looking forward to going out there and doing my best to help the team."

The ultimate individual end of season goal is to be healthy to perform well at the Footlocker Northeast Regional at Van Cortlandt, a course she enjoys racing on.

As for the future, Curran is not exactly sure what path she is going to take. She has goals, both long term and short term, as well as a dearth of options. Which one she chooses, is still very much up in the air.

"Going into next year, I'm definitely hoping to get well into the 17's (minutes) at Brown, and place high or win other meets," she said. "I'm looking at track now to get my times down for college." 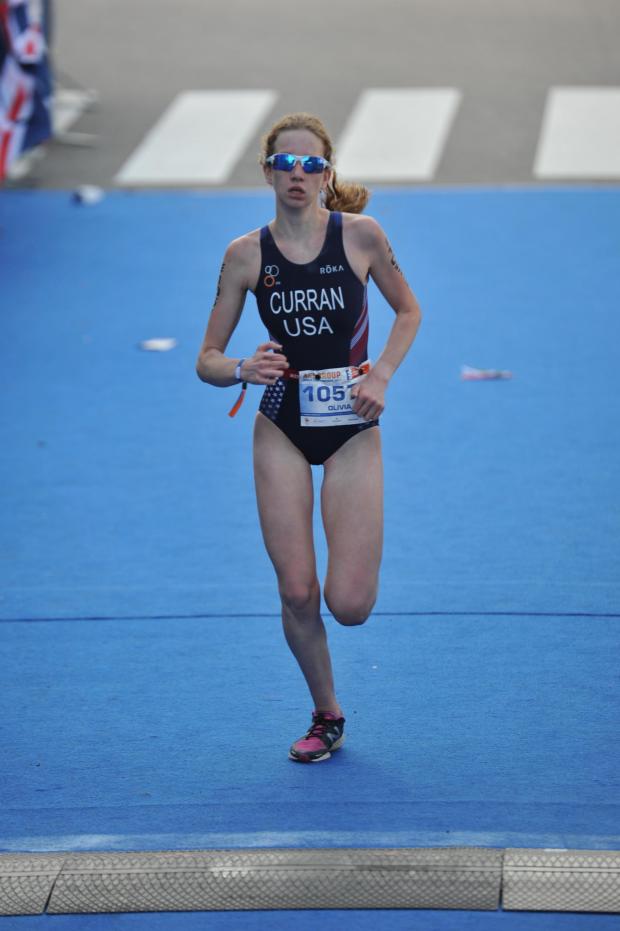 Like many distance runners, Curran favors the cross country season over track. Believing she is better at the longer distance races, she is looking for an improvement in the 3000-meter run, hoping to qualify for New Balance Nationals in the 5000-meters.

As for what exactly she is going to do in college, that is yet to be determined.

"Up until recently, triathlon wasn't an NCAA sport for women. In the last few years, they have made it a sport," she said. "I'm looking at possibly competing in college or I may just run in college and do triathlons in the summer and compete in them more after college."

Whatever the choice, the door is opening wide to future success.