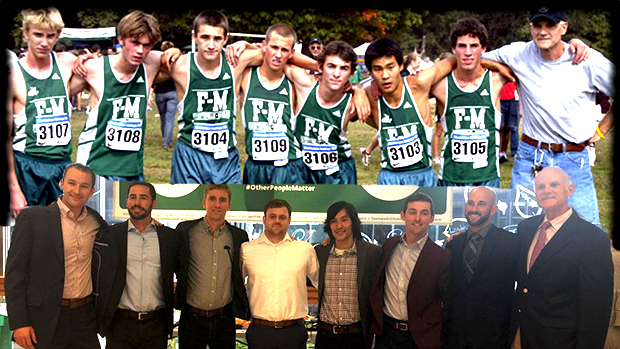 It's been exactly 14 years since the word, "Stotan," had reemerged in the public consciousness.  Originally coined by Percy Cerutty in the early 1950's, the term, a contraction of Stoic and Spartan, had long since become out-of-use.  That is, before the Hornets of Fayetteville-Manlius, embodying the mantra of Stotan, shocked the world with a perfect 15 score at the Manhattan Invitational, against the preeminent team of the Northeast, Christian Brothers Academy of Lincroft, NJ.  There were triumphs both before and after the 2004 Manhattan Invitational, but the annual event was the stepping off point for the program's history.

The original Stotans (Jared Burdick, Tommy Gruenewald, Andrew McCann, John Heron, Geoff King, Owen Kimple, Dan Marnell) had returned to Fayetteville-Manlius for a reason.  Beginning in 2016, the school had created an "Athletic Hall Of Fame."  The seven athletes were part of the second induction class.  In the first induction class, Kathy Mills-Parker represented the Track & Field and Cross Country Programs.  Of the bunch, Owen Kimple, Tommy Gruenwald, and Geoff King would all go on to win individual State Titles on the track, but it was their team effort that would be most memorable.  The program's philosophies set the groundwork for all the boys and girls teams in the years to come.

Although the Manhattan Invite was historic in it's own right, the record breaking day would come later in the season, at the Federation Meet.  Then the most important meet of the year, the Stotan's unleashed their peak performance, which remains as the highest Speed Rated Team Performance of All-Time.  All these years later, the mark has yet to be challenged, although the closest to come, was the FM Boys Team of 2014.

The Stotans of 2004 were not the only running legends inducted into the 2017 Hall of Fame.  Joining them was Laurel Leone.  Then Laurel Burdick in the class of 2002, she was the first girl to become a three-time Foot Locker National Qualifier.  She won the Federation Meet as a sophomore, then placed second to Nicole Blood the following year, and then third to Molly Huddle her senior year.  She captured the 3000m State Title on the Track, before heading to Boston College, ultimately becoming an NCAA D1 All-American.  She still competes locally for "Stotan Racing," a post-Collegiate running group headed up by former Assistant Coach, John Aris.  She recently placed 22nd overall at the Utica Boilermaker, fourth American finisher for the 15K distance.