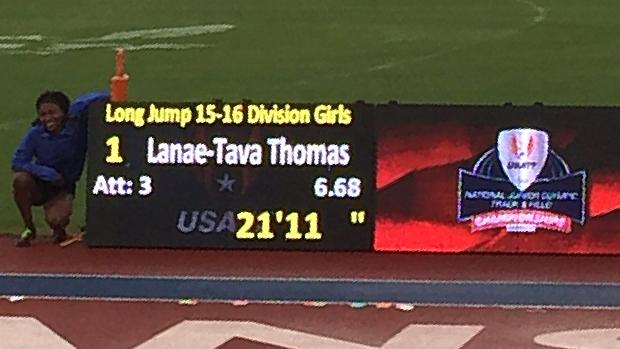 Some believed it was only a matter of time for Rush-Henrietta (NY) High rising senior Lanae-Tava Thomas to register a milestone jump in 2017.

Then it took place Wednesday.

Thomas had struggled with trying to find legal conditions to capture the New York State record for much of the year, but after surpassing the mark three times before -- all conditions efforts -- she finally got the legal mark at the USATF National Junior Olympic Track and Field Championships on Wednesday in Lawrence, Kanasas.

Now, with only the national record left out of reach, Thomas is closing the gap on that as well.

On Thomas' third jump, she released a monster effort. Hitting a 6.68m mark, or a converted 21-11, Thomas cemented not only the best jump in New York state history, but she became the newly minted Junior National record holder.

She broke the former record held by Carol Lewis at 21-7.75 in 1980.  Lewis is the younger sister to Olympian Carl Lewis. Thomas was consistently out at these distances at the 2017 New York state meet, but at the time she found it difficult to line up at the board.

The season isn't done, however.  Thomas is the fastest qualifier out of the 100m trials, with an 11.69 second time.  The 100m semifinals are on Friday and then finals follow on Sunday.  Stay tuned for more updates as the competition continues.