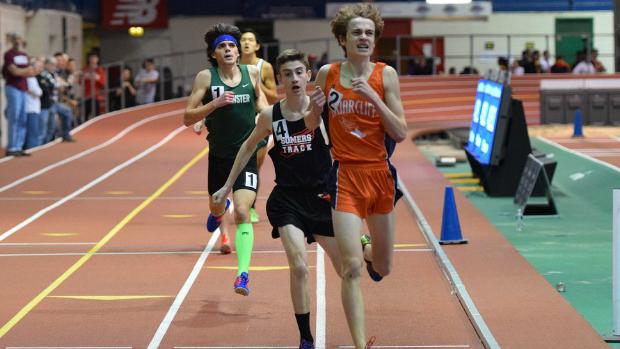 Your top two seeds here may come from out-of-state.  David Whitfield (Arch. Prendergast) has a personal best over 800m of 1:53.38, , as well as Andrew Delvecchio (Lake Braddock, VA) with his PR of 1:55.22, which should translate well to the 1000m.  Then there is Antonio Lopez (Colgan, VA) with a 2:31.56 over the true distance.  On the home front, you'll have Ryan Tierney (St. Peter's) coming off a win over the mile at the Bishop Loughlin Games, while Matt Nieves (Bishop Loughlin) ran well at Marine Corps.  The wildcard goes to Ajax Diamandis (Brien McMahon, CT), who has gone 4:16 for the full mile, and will be dropping down in distance.

It's an early season battle here, and Robert Becker (Kingston) comes in as the athlete under 4:20, with his 4:19.68.  As mentioned Ajax Diamandis has gone 4:16, will be doubling on the day.  Will there be enough rest?

Section 1 will be throwing some of it's up and coming talent at the leaders, looking to be the next sub-4:20 mile for downstate.  On the radar is Greg Fusco (Somers), Brian Camillieri (Nanuet) and Dylan Serino (North Rockland).

Speaking of big section turnouts, Section 2 is sending two pairs to be in the mix.  Saratoga has Declan Hines and Shea Weilbaker, while Shenendehowa has Alex Hislop and Alex Matson.

Alex Pai (Morris Hills, NJ) will represent the biggest out-of-state threat, with a 4:21 personal best.  Also look out for Behailu Bekele-Arcuri (Warwick Valley), a top placing Freshman in XC.  The Frosh State Record of 4:21.48 wouldn't be unheard of if he can edge into the seeded heat.

Lake Braddock, VA will have the top seed in the longest distance, as they also do on the girls side of the action.  Conor Lyons took second to Aidan Tooker (Saratoga) in this event last year, and is coming back with a 9:16.97 to improve his placing.  Looking to keep the title in the Empire State will be Jayson Hines (Kingston) and Declan Hines (Saratoga) - no relation.  Both will be in the mix, but will need a big step up to secure the win.

The man to prevent Lyons movement is Ryan Gallagher (Briarcliff), who comes in with a personal best of 9:15.46.  A great XC season for him just ended, and it could carry over.  Same for Giancarlo Cipri (Xavier), who was floating around the  mid 9:20's last spring.