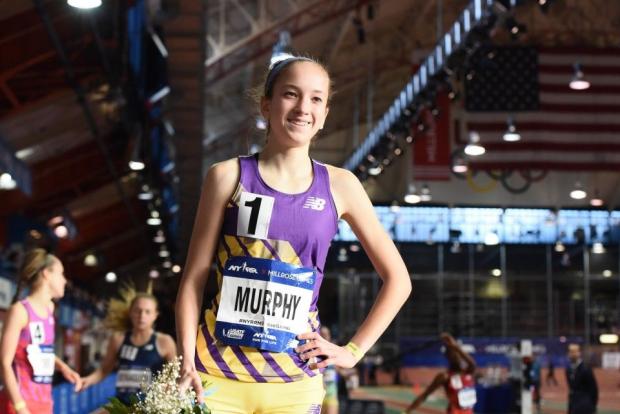 Two New Yorkers who saw each other on the XC trails will be returning to their stronger discipline.  Alex Harris (North Rockland) may be key player in the Steeplechase scene outdoors, but for the past three years, she has been Section 1's top dog in the 1000m.  For Hannah Reale (Shenendehowa), it's been more about the 800m, most notable an incredible anchor leg to win the Penn Relays Championship of America title in 2016.  These two will face off for the first time ever on the track, fighting for a top time in the event.

But they won't be alone.  Emily Philippides (Greenwich, CT) just recently ran 2:13.39 for 800m, and looks to be coming into the new year strong.  Virginia is sending top talents as well, with Shannon Schewers (Lake Braddock) at 2:13.0, and Olivia Beckner (South Lakes, VA) with a 2:15 personal best.  Reale's teammate Julia Zachgo is another to watch out for, right up there with Reale in XC.

Bump up the distance and we see some more matchups carrying over from XC.  Once again, Shenendehowa and North Rockland fill out many of the top seeds in the field.  For the Lady Raiders, Haleigh Morales and Kerry O'Conner will be well representing the team.  Both have sub-5min personal bests, with Morales at 4:50.00.  Her XC season indicates that may go down at her Ocean Breeze Opener.  For the Stallions, Olivia Lomascolo and Charlotte Hartman find themselves top seeded.  Both, too, are under that 5min barrier, and look to have improved this XC season.

Who else is in the mix?  Notre Dame Academy will be sending their top two as well, as Sydney Rice and Keiana Mitchell will represent Long Island.  Both are under 5mins, and will be in the hunt.  Angela Castrobuova (Carmel) has the best personal best in the field at 4:47.33, while Kelly Iocca (Connetquot) has the best season's best, running 4:50.71 just last week.  Giuliana Sadler (Minisink Valley) rounds out the top contenders with her 4:51 personal best.

North Rockland won't have Shenendehowa to worry about in the 3000m, but they may have something even tougher.  Enter Kate Murphy (Lake Braddock, VA), who will be opening up her season over the longest distance Indoors she's seen since her sophomore year.  Since then, Murphy has clocked an astonishing 4:07.21 in the 1500m and made the Olympic Trials.  In addition, she's ran the 3000m Outdoors, clocking 9:10.51 to win the USATF JO's last spring.  This will be Murphy's season opener against real competition, despite tempoing a 5:06 mile in mid-December.

If there was one athlete from New York to put pressure on an early season Murphy, it would be freshman Katelyn Tuohy (North Rockland).  She's already proven she can run unafraid of the competition, after putting severe pressure on Sammy Watson at last year's Spring State Meet.  Tuohy is coming off her best XC season yet, that was preceded by an 8th Grade State Record Indoors for the 1500m in 2016.  This will also be Tuohy's opener, so the pair should be on even ground, and could put a real threat to the win.  Not only that, but she could also use the race as a real chance to chase down the freshman state record in the event, set by Kelsey Chmiel (Saratoga) last winter at States, by surpassing the 9:41.73 mark.

There are some other players in the mix, like Olivia Elston (Goshen) and Sydney Rice (Notre Dame Academy), but none with the credentials of the top two.