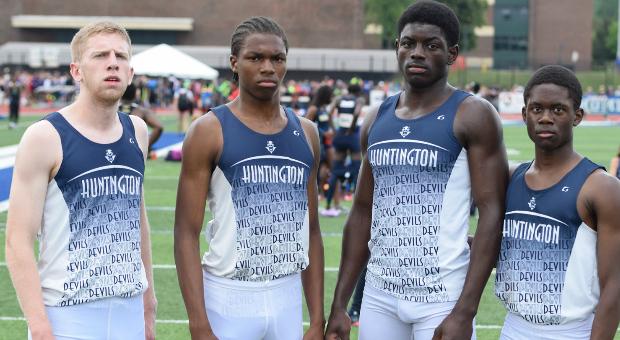 History has stood no chance this past season.  One week after Rayvon Grey took down the oldest New York State Record, the 1965 mark by future World Record Holder Bob Beamon.  With the removal of that record, another took the title of the State's oldest.

The 1966 White Plains Relay is stuff of legends.  They set the then-National Record of 3:12.7 in yards, on the cinder tracks, one week after smashing the National 4x200m record.  The time converts to 3:11.6 for meters, and had stood for 50 years, and five days.  The record, is now past tense.

Showing an incredible jump in performance, New York State Champs Huntington of Long Island shattered the record in winning the New Balance Outdoor Nationals.  The race camp after anchor Infinite Tucker set a new personal best in the 400m, winning yet another National Title in 50.70 in the 400m Hurdles.

The mark they broke is significant for many reasons.  Much like Beamon, several legs of the relay went on to World Record or Olympic Gold.  Tucker ran 46.07 on anchor leg to hold off for the win, and rewrite history that could stand for yet another 50 years.