For the distance runner, not all watershed moments occur during championship races or personal record performances.  The true breakthroughs—be it of fitness or racing mentality—come to pass not while exchanging elbows with competitors under Jumbotrons, but instead while toiling along road shoulders.

While it's the race day performance that ultimately secures a headline in the local sports section the next morning, for the distance runner, the mark is often only secondary to the process.  After all, without the training, the performance would be impossible.

For Tappan Zee junior Luke Gavigan, who enters next week's Millrose Games as one of the top seeds in the New Balance Boys High School Mile, the epiphany occurred in the most mundane of places: his high school parking lot. 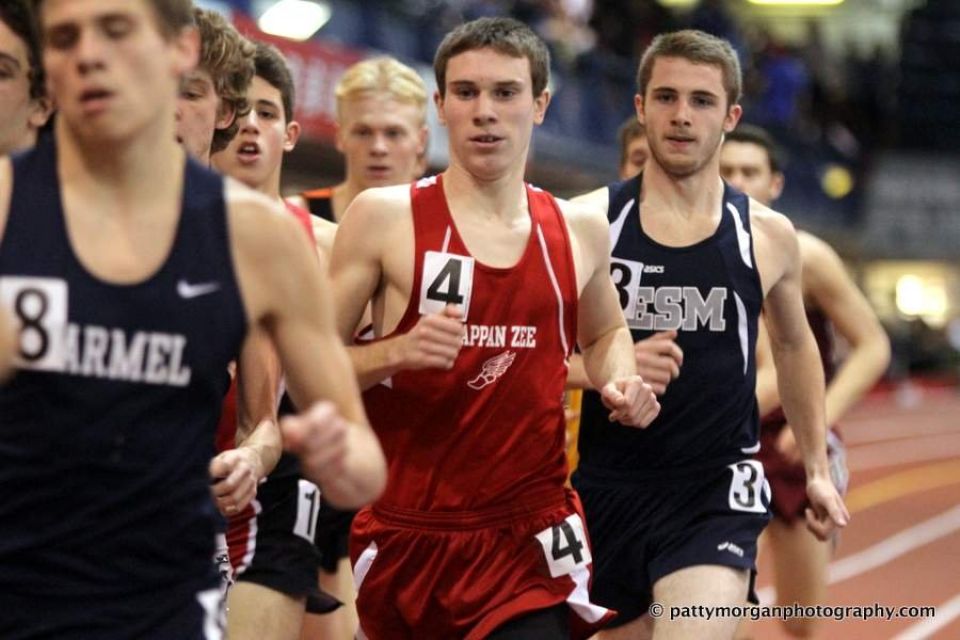 Gavigan took the Armory by storm at last month's Millrose Trials.  Reserving the one of the coveted thirteen spots on the line at the 107th edition of the prestigious meet, Gavigan blazed to a 4:15.68 mile.  With the 2014 track season still very much in its infancy, the mark is impressive in and of itself – the time representing a two second improvement from Gavigan's 4:17.45 Penn showing last spring.

“I took two weeks off after cross country,” recalls Gavigan.  “I hadn't been training that long before Trials; maybe two to three weeks, and, because of the weather, I had only done a few parking lot repeats.  I didn't think I had 4:15 fitness.”

What is truly phenomenal about the run, however, is the way Gavigan secured the victory.

“I had a decent start, and was just trying to stay relaxed and not get tripped up.  When I was four-hundred meters in I found myself in the back of the pack, so I knew had to work myself back up there.”

When the leaders crawled through the half in 2:11, Gavigan knew the pace would only hasten.

At the gun, Gavigan kept stride with Chaminade's Sean Kelly and Christian Brother Academy's Mike McClemens, who began to distance themselves from the congested field: a product of the conservative early pace.

“I just tried to stay relaxed in the beginning because I knew the last lap would be quick,” Gavigan recalls about his in-race strategy.  “I wanted to leave a little in the tank.”

On the back stretch of the last lap the three were dead even, and the stage was set for a photo finish – Kelly, McClemens and Gavigan all seemingly equal contenders for a coveted Millrose invite.

Gavigan had other plans.  In a blistering final 100-meters hand timed at 12.3 seconds, Gavigan catapulted himself into the lead, winning by over two seconds.

“I was aware they were all fast guys, so I knew I needed to keep grinding it out.”

While it might have felt to Gavigan like he was “grinding it out,” his finish did not appear as a flailing, gut-wrenching sprint.  With little to no compromise in form, it appeared more as a mechanistic shift into a higher gear.

The mile winner had closed his race like he was running the 400-meter.

“I was definitely looking for a fast time.  To that point, it felt like it had been far too long since I ran a fast time.” 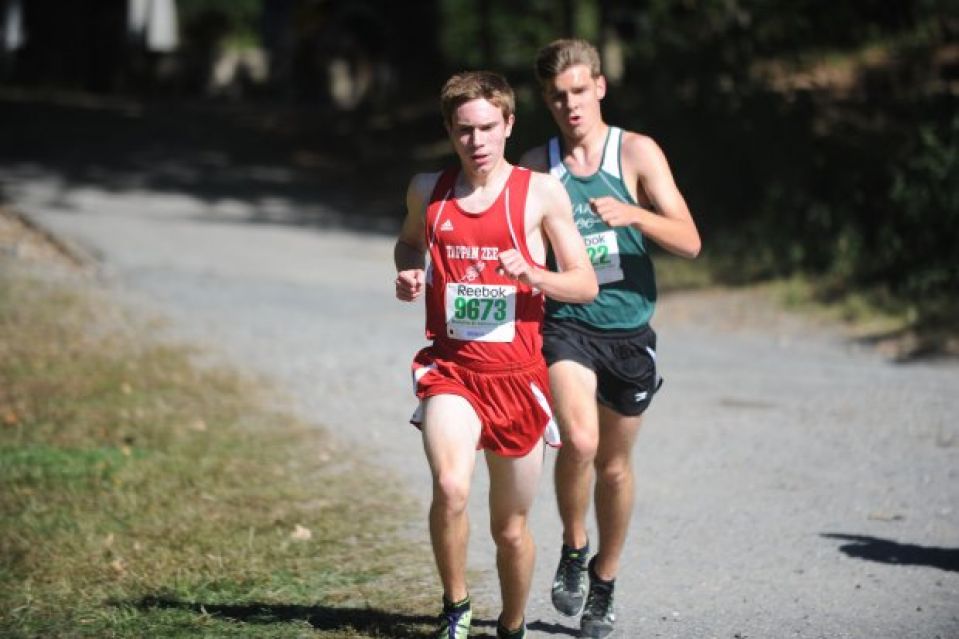 “We were honestly shocked by his time. He had been doing road running – tempos and parking lot loops, but no workouts.  At that point, the sharpening phase had not begun.  He was basically just doing strides after his easy runs.”

For Driscoll, three weeks into the season, his mid-distance standout's early-season foot speed did not correlate with his training stage.  The explosive finish forecasted big things to come.

“During the two-to-three week period between Millrose and the State Championships we are hoping to produce the speed, training shorter and sharper,” said Driscoll. 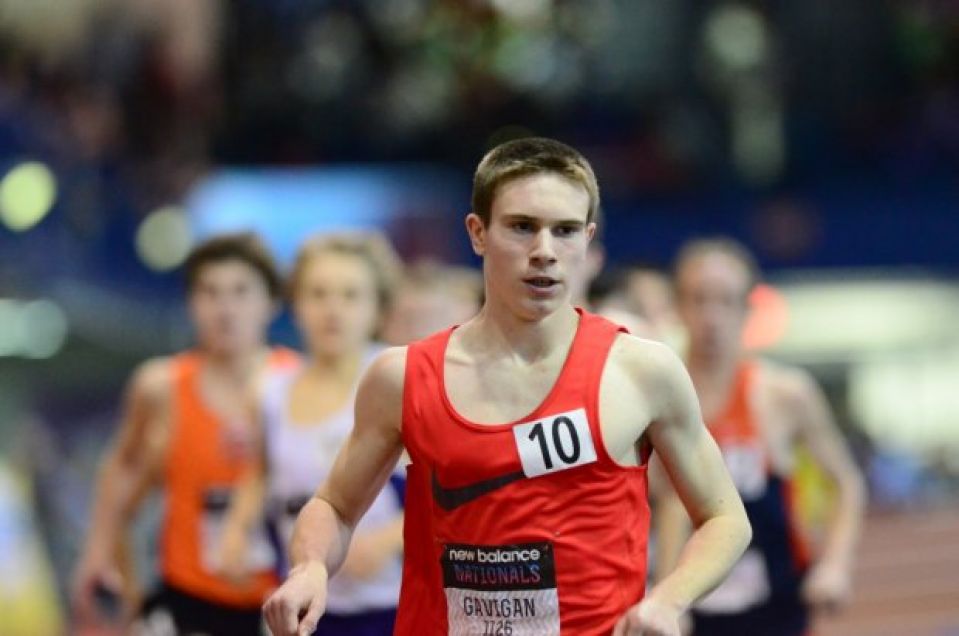 With a training volume of only 35-40 miles per week, Driscoll's M.O. has always been quality over quantity.

“[Driscoll] doesn't like us to do much mileage,” Gavigan said when asked about his weekly mileage.   “We usually run shorter distances, but while we are out there, we are running very hard.”

The approach yielded huge dividends for Gavigan as a freshman, culminating with a runner-up finish in the New Balance National Frosh Mile (4:22.68).  But according to Gavigan, compared to 2012, his sophomore campaign left something to be desired.

“My sophomore year was okay, but it wasn't what I had hoped for.”

There were some highlights—most notably the 4:17.45y at Penn—but for the most part Gavigan's sophomore times did not reflect that of one of the nation's up-and-coming high school runners.   Coach Driscoll attributed the dip in performance to a sort of athletic identity crisis.

“I think to some extent there was some growing into his body, which was a big part of it.  He put too much pressure on himself,” recalls Driscoll about the sophomore regression.  “His freshman year he just kind of went with it, but his sophomore year I think he started over-thinking things. He was trying to figure out his event.”

If there was any doubt as to Gavigan's event-of-choice heading into the indoor season, his Millrose Trials performance provided an emphatic answer.  When asked about his preferred event, Gavigan responded without hesitation: “I consider myself a miler.” 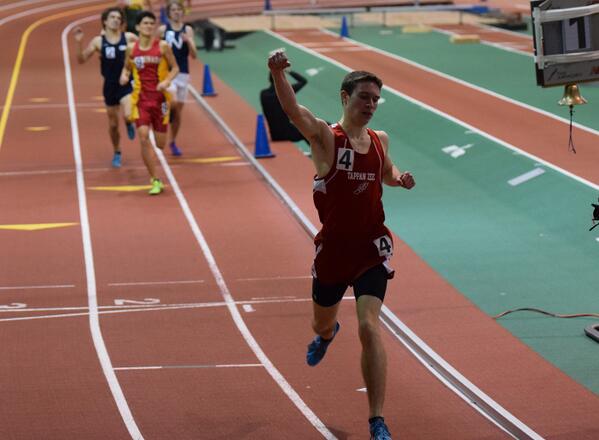 With the Millrose Games on Saturday, if there was ever a time to segue from the parking lot asphalt to the banks of an indoor track, it is now.

“We are really looking to showcase his talent on that [Millrose] stage,” said Driscoll.

The Tappan Zee High School track remains snow-covered, however, so Gavigan and Driscoll have had to make-do the best they can.  In an attempt to emulate 400-meter repeats, one-minute “pushes” on that familiar parking lot loop are developing the fast-twitch muscles Gavigan needs to finish strong on Saturday.

Gavigan's 4:15.68 stands tall among the New Balance Boys HS Mile entry list, trailing behind Pennsylvania’s Tony Russell, who won last weekends New Balance Grand Prix.  However, Gavigan leads those from the homestate in their venture to keep the title within the Empire State

“I feel pressure being the top seed, but I am just going to do my thing. I feel confident I can go out there and run a good race.”

Gavigan's most recent race effort at the Armory Collegiate Invitational produced a 2:29.09 mark for 1,000-meter distance. He finished sixth overall behind US#1 performer Kenneth Hagen of Blacksburg Virginia (2:26.94) and Section-I rival Brian Cook of Pear River (2:27.75).  While Gavigan is pleased with the time, he acknowledges his tactical execution has plenty of room for improvement.

“Overall, I'm happy with the time, but I'm still learning how to run the thousand.  After the race I felt like I had more to give.”

According to Driscoll, while Gavigan is proud of his accomplishments to date, he remains a student of the sport who is always striving to improve.

“He is very serious about it,” said Driscoll.  “Luke asks a ton of questions, which I think is great because it means he still wants to learn.   We discuss how workouts go and what the plan is for a given race.  He has big goals for himself.”

Chief among Gavigan's goals is a sub-4:10 mile by outdoor track – a reasonable ambition given the lopsided manner in which he ran the 4:15.

But Gavigan’s reach-for-the-sky attitude is tempered by a healthy dose of humility.

“He is very humble,” Driscoll assured. “He was honestly shocked by his time down at the Millrose Trials. He couldn’t believe he accomplished what he did in a race of that caliber.”

The Millrose Games will be televised live Saturday February 15th on NBC Sports Network.  Coverage begins at 3pm, and the New Balance boys’ mile run goes off at 4:08pm.   There will also be an encore stream between 5-7pm on USATF.tv.  For those who want to watch in-person, tickets are still available.