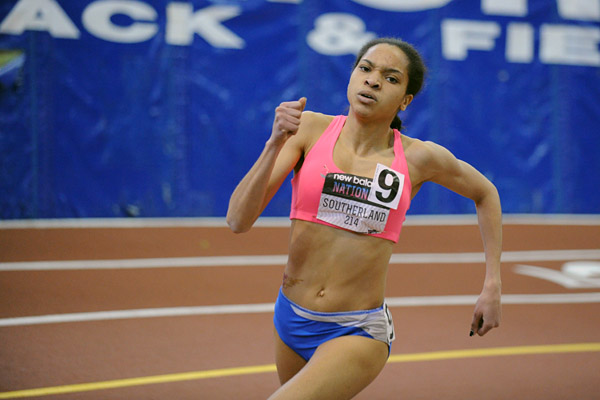 The rise of New York City starlet Sabrina Southerland of Benjamin Cardozo has almost been poetic.  Despite a sleeper second place finish at the Outdoor State Meet in 2012, much of the spotlight had been on her teammate, Alexis Panisse.  As the 2013 season began, Southerland had been competing well in cross country, clearing the best in the PSAL, but nowhere near the successes she would find herself in, once on the track.  But it was once she hit the track, that things started to shine.  She opened her season up blistering fast, blasting to a 2:52.11 in the 1000m, in the first week of competition.  The mark would have stood at 4th in the nation by the end of the season, but Southerland topped herself, improving to 2:47.44 by seasons end, a new state record.  She went undefeated over 1,500m all season, which included the venerable Millrose Mile title, the first for a PSAL City Girl in years. At the Indoor State Meet, she would run the 1,500m almost uncontested on the last lap, blowing past the competition to win in 4:34.26.

But moment number 2 on our list of the top such moments in 2013, comes from another discipline.  The 800m, an off event run only at some of the biggest invitationals, is where Southerland's fame would come from.  At the Hispanic Games, the Senior's first foray of the season into the event, did not go as well as expected.  Southerland took 9th in 2:20.55.  Redemption came two weeks later, when Southerland went 2:09.67 at the Yale Classic, a mark that ranked top in the nation at the time.  But by then, the 800m would no longer show up in regular season.  It would have to wait for one of the biggest stages in Indoor Track: New Balance Nationals.  There, Southerland would start off her weekend with a National Title, with a US #4 All-Time performance in the DMR.  Resting until Sunday, Southerland was able to watch the dizzying amount of talent fly around the Armory Oval.  But it would be Sunday afternoon, where Southerland would culminate her spectacular season.  As the race went off, (video here), something unfamiliar happened.  Maddy Berkson, of Rhode Island, took the lead, and wasn't letting up.  Southerland, not used to being behind, trailed the senior through 400m, where they each split around 58-seconds.  500m in, and Berkson was still leading at an unrelenting pace, and looked to stay there for the remainder of the race.

And that is where our number 2 moment occurred.  In between 500m and 600m, Sabrina Southerland found another gear.  She propelled past Berkson, and shot around the turns.  At the 600m split, she crossed in roughly 1 minute and 30 seconds, almost a new national record for the open 600m!  She powered on, creating a larger and larger gap as the race progressed on the final lap, and didn't let go of the intensity until she crossed the line, in first place.  Too tired to comprehend the accomplishment, Southerland bent down to catch her breath, as the announcer came on to let everyone know.  Sabrina Southerland had gone 2:03.59, a mark which was only bettered by Mary Decker years prior.  After a full year of comparisons to Mary Decker being laid on Mary Cain, Southerland proved that New York did not have to be limited to only one mid-distance standout, going US #2 All-Time in an all high school competition.  Southerland would move on to a very successful outdoor season, including wins at the Penn Relays, and the Outdoor State Meet.  At New Balance Nationals, she would return to the 800m, defending her title in 2:06.26. (Check out her post-race interview right here) 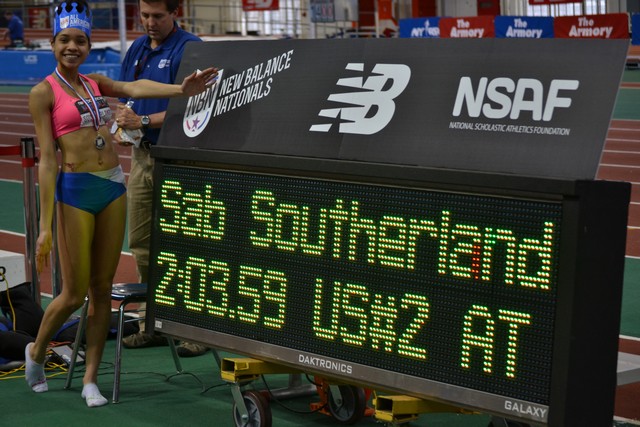 A Season of Winning For Southerland Family 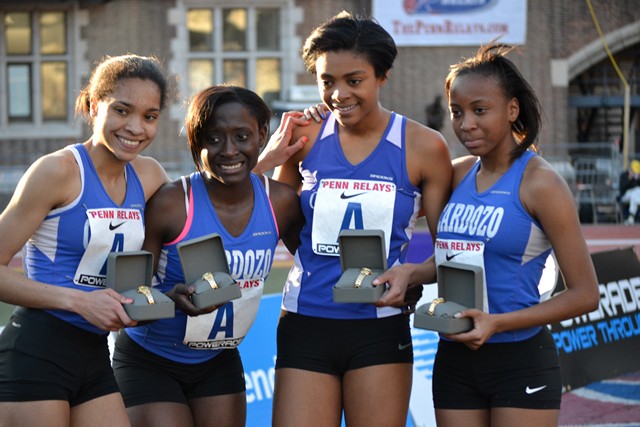 Indicative of the depth of talent in New York State, these 6 moments didn't quite crack the list.  While we maintained an equal balance of boys and girls on our list, these stories were just on the precipice of being included.  If anything, they are a testament to the pool of exceptional athletes we have in the Empire State.

Finding the perfect 400m hurdler is never easy.  Finding one with the form to clear, as well as the speed in between, is sometimes impossible.  But here comes sophomore Rai Benjamin, of Mt. Vernon, who recently capped off his 10th grade year with an impressive mark.  Competing for his native heritage of Antigua in the World Youth Championships, Benjamin hit NY #5 All-Time in the 400m hurdles, with his 52.36, making honorable mention on our list.

Finding a home for her running talents in her senior year, Deajah Stevens immediately made an impact on the Empire State running scene after joining Benjamin Cardozo.  But nowhere was that presence felt more, than at Penn Relays, where her 400m leg in the DMR blew out the race from the competition, and enabled the quartet to win the first ever female Penn Relays title for NYC in meet history.  Not only that, but the mark would survive as the fastest time ran in the United States in 2013.

Across both indoors and outdoors, it was a triplet coming from Long Island, that enabled one team to dominate our State Team Rankings.  Benjamin Bonhurst (Shot Put), Devin Mirenda (Long Jump), and Mike McCann (High Jump), each found themselves either the state leader, or in the top 5 for their event in the state.  The combination of each discipline, all on one team (Smithtown West), puts them on our honorable mention list.

Speaking of Shot Putters in New York State, 2013 was an exceptional year for the event.  We had seven throwers over 58 feet, and two of those over 61.  Highlighted by teammates Will Pope and Billy Bishop of Iona representing downstate, Devon Patterson taking the Upstate, Bonhurst throwing for the island, and late peaking Oghenakpob Efekoro of NYC, the All-Time list for the event was virtually rewritten by seasons end.

Ryan Manahan of Marcellus had been having a quiet year in terms of track invitationals.  That is, before he entered into the 800m at the Loucks Games.  Traveling nearly four hours, the senior entered into the race against the very fast, and then-state leading Dylan Murphy of Kellenberg.  Ignorant of the race tactics of the competition, Manahan went out hard, and Murphy soon chased.  The pair matched stride for stride down the straightaway, until Manahan solidified his win with a kick to 1:52.28. Manahan would later go on to win the State title, with the fastest time in the state this year.

It would be hard to make note of 2013 without mentioning two unique performances.  The first belongs to that of Bella Burda, (Arlington), who sped to a very impressive mark of 9:33.90 over 3000m indoors.  Likewise, Stephen Shine, (Briarcliff) also of Section 1, made an impressive jump at the Penn Relays, where he took second overall in the 3000m, clocking 8:25.87.

8. The Year of the Sprint Relays

2013 was fast.  It seemed as if sprinting times were flying down, curious for a year with numerous weather-related interruptions in training schedules.  But regardless, the sprint relays had unprecendented success.  On the Girls' side, New Rochelle brought a new level of competition to the 4x200m, and 4x100m.  All underclassmen, the full relay returns next year.  But the girls had to let go of the titles, as Medgar Evers' girls soared to a new state record outdoors, as well as the national title both indoors and outdoors.  The speed was relegated to only the girls, however, as Greece-Olympia took a flying approach to the State 4x100m final, ranking top 10 all-time in the state.  Mount St. Michael and Hackley both put pressure on them as well, putting in solid times themselves.  All-in-all, a very fast year.