10. Rulers Of The Relays 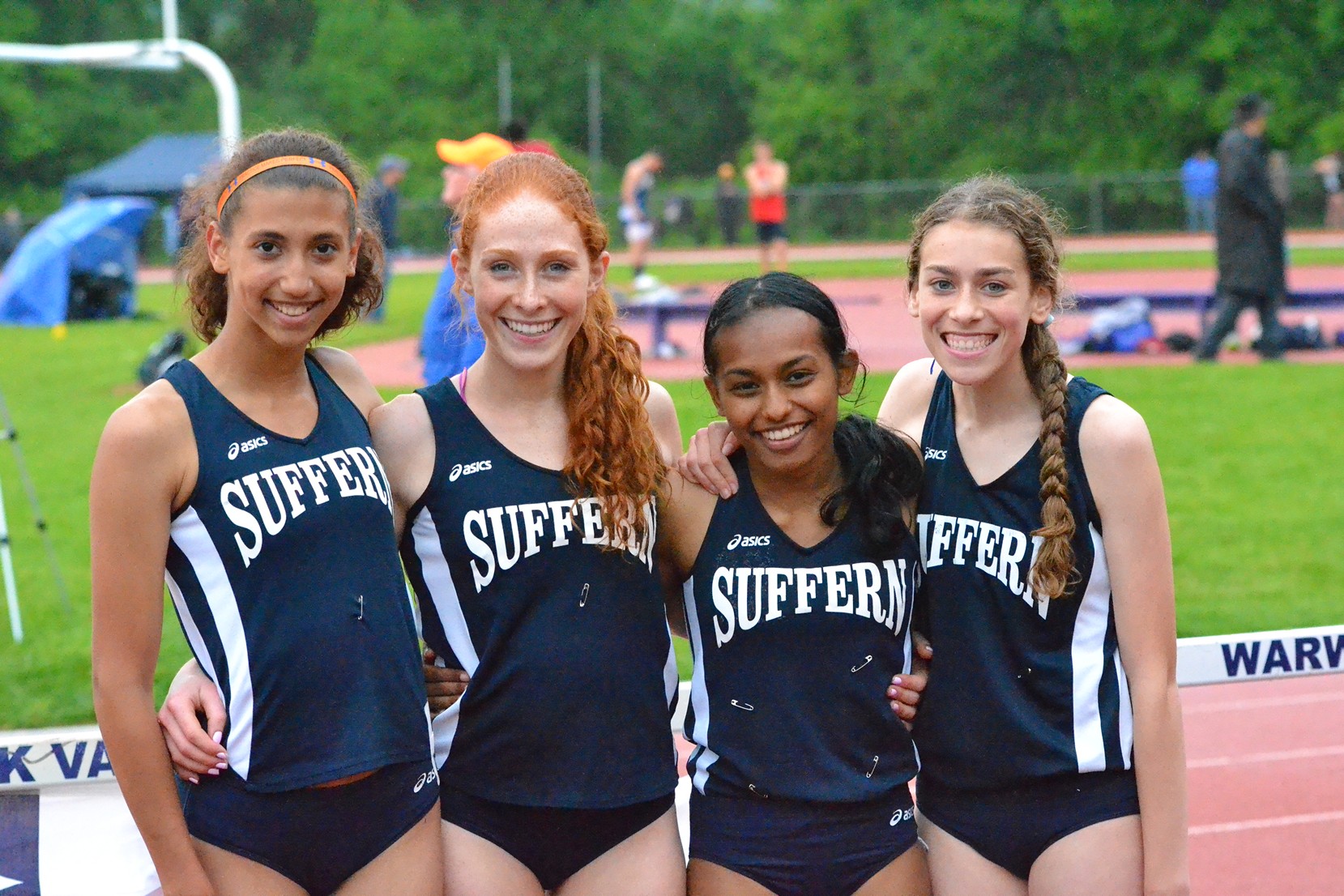 We kick off our list with not just one athlete, but a whole squad.  The lineage of excellence from the Suffern High School girls' team includes the ranks of Shelby Greaney and Jen Clayton.  Now, it seems that a few other names can be added to the list.  Mixing an array of members, ranging from 8th grade middle schoolers, to the seniors of the high school, Suffern was able to continuously put together some of the most successful relay teams in the state, as well as the country.  While for most teams, finding four fast sets of feet is a tall order, Suffern managed to have an interchangeable lineup of ready runners to take to the track.  The ability to diversify their relays gave them an edge over most other schools in the state.  They were better suited to doubling at major events, seen at both New Balance National events.  Both Indoors and Outdoors, they managed to snag All-American titles, as well as taking the 4x400m State Title outdoors in a state leading time.  But the moment we'd like to recognize as one our top moments of 2013 comes from a meet not in Section 1, their home section.

Warwick Fast Times tends to live up to its' name.  The meet is one of the last in-season meets before the state meet, and with all teams peaking for the championship, along with the great fields produced every year, the meet produces some flying times.  The girls lineup for the 4x800m was set to be a highlight of the meet.  Indoor State Champions, Bronxville, as well as the home team, Warwick, were among some of the favorites.  Suffern, at the time, had not run faster than its' 9:17.26 indoors, despite showing it had the relays legs to do so.  As the gun went off, Suffern immediately jumped to the front, along with Warwick.  The pair pulled away, almost as if in tandem, from the pack of runners that made up the rest of the field.  The race had turned into almost a dual meet, as Suffern exchanged the lead with Warwick, as Suffern senior Sarah Adler battled freshmen XC State Champ Megan Reilly of Warwick on the second leg.  The race continued in tandem, until the anchors took the baton.  With Warwick hot on the heels of 8th grader Kamryn McIntosh, the race stood as a stalemate into the last 200m.  There, it would be Suffern's late race kick to solidify the win.  But the story didn't end there.

Every official checked their clocks as the frosh crossed the line.  Handtimes ranged both above and below the magic number of 9-minutes even, the standard mark of excellence for a female 4x800m.  The relay had run the race with that goal in mind, and awaited the answer from the timer.  As the FAT came alive, the answer was clear.  Suffern had run just .24 seconds shy of the 9 minute barrier, which would mean that in handtime, their mark was 9:00.00 exactly.  Despite the frustration, their official clocking of 9:00.24 put them at US #2 at the time, a mark which would only drop one place by seasons end.  An incredible time, and an even better race to achieve.  And, to shake it off, two of the relay members came back thirty minutes later, and won the 4x400m in a swift time of 3:53.83.  Not bad for a days' work.

We've included all the mark which point to Suffern having one of the deepest relay squads in the nation. 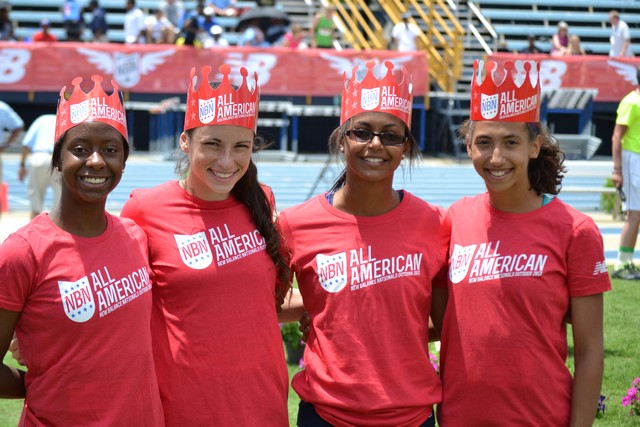 9. From Grimace To Glory: The Story of Eric Holt 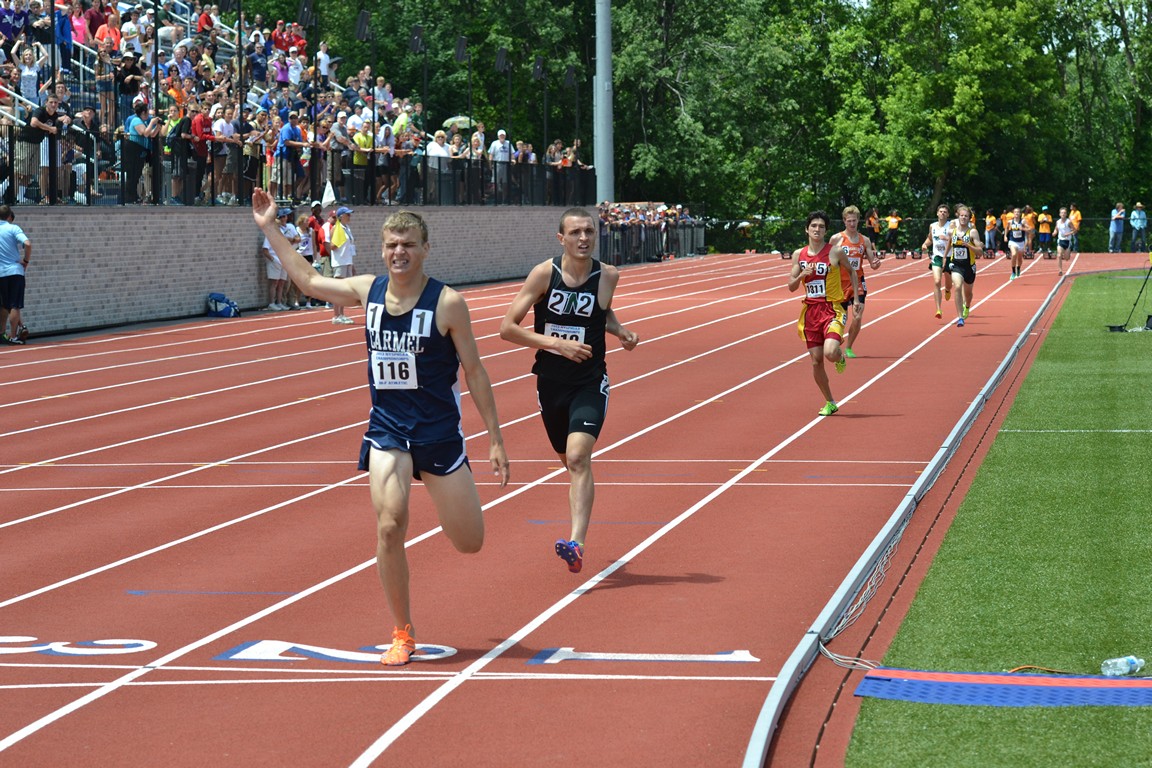 It's difficult being a distance runner in New York State. Even tougher when your own school record is among the high echelons of talent around.  The Empire State is inundated with talent carrying over from stellar XC programs.  It sometimes can create situations where you are fast enough to win State meets in more than half of the Nation's competitions, but back home, the title is more elusive.  Such is the story of Eric Holt's junior year.  He had great races, and great times.  He took placed well at both Indoor and Outdoor Nationals in the mile and 2-mile disciplines, which, as a junior is very impressive.  As he entered his senior year, the state title became more on the mind.  In the XC season, he shot out of the gate, running sub-15 on the always questionable Six Flags Great Adventure course, an impressive stat.  He continued on his XC career, taking 3rd at XC States, and making it on the NXN-NY team.  As indoor track began, his racing schedule slowed down.  The strategy appeared to work, as he won the Hispanic Games mile in 4:16.55, and then contested some events over shorter distances as adequate speedwork.  His 9:09 3200m indicated he had the speed to challenge then-state leading Sibby Hanson of Arlington up at Cornell, but Holt opted for the shorter 1000m option.  There, he took 6th in the state.  He closed off his final indoor race with a nice 9:07.55 at NBIN, along with a commitment to run at Binghamton University.

Outdoors continued much the same.  Passing by the Penn Relays, Holt ran smaller races more local, highlighted by a 4:19 tight-win at the Somers Lions Club Invite.  There, he made it clear he was shooting for the state meet, and was ready to push himself to the times needed to make it a reality.  He returned the following week to the Loucks Games, where he impressively split 4:08.77 in a DMR 1600m race, the day before he took 5th in the invitational.  A week and half later, he cruised through the line at his county championship, amidst a minor timing controversy.  He was timed at 9:02.00 for the 3200m, but the officials misheard, and wrote down 9:00.20 on the card, making the latter the official time.  Either way, he was prepped for the championship season.  Having both standards, Holt cruised in the 3200m at State Quals, and saved his energy for a PR-mark of 4:10 to qualify for the mile.  The plan was falling into place, that is, before the rain came.

The day of states had begun like no one had predicted, (except maybe the weatherman).  The meet had been canceled, and consolidated, into a one day affair.  Coaches around the state had to decide what to do about seemingly impossible doubles in the distance events.  The next day, Carmel had made it's decision.  Holt scratched from the 3200m, preserving his energy for the shorter distance.  In his wake, Nick Ryan of FM took home the title, in what would be relaxed for him.  Ryan had decided that the consolidated schedule wouldn't change the gameplan, and was set for both races.  The race lined up just hours after the 3200m, and Holt pushed to the front of the pack early.  He knew he would have to push the pace to tire out the field.  The pack stayed tight over the first 800m.  Race favorite Nick Ryan was leading through the wind, and Holt, amongst others were in close pursuit.  The two exchanged the lead over the third lap, pushing eachother figuratively to a fast last lap.  It became clear the two would be battling toward the line, and the race would be decided in the last 100m.  They exchanged surges around the final bend, and emerged dead even with a straightaway to go.  Running with his standard form, a chugger, a term coined by international announcing at the Millrose Games Indoors, Holt pushed to the line, unintentionally exchanging elbows as they went.  Holt overtook Ryan, and would take home his first state title ever.  Holt's determined effort to achieve his goal ranks as our #9 Moment of the 2013 Season. 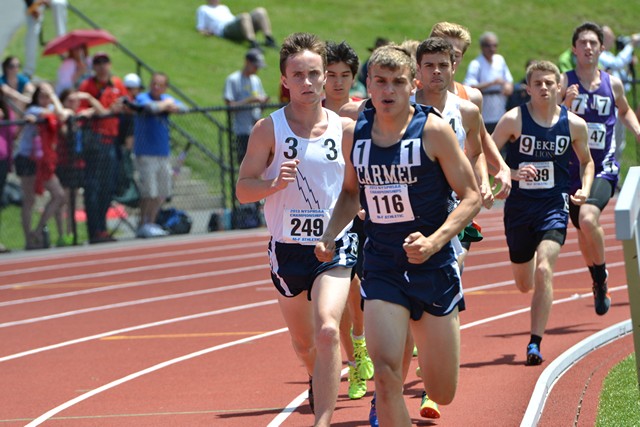