Schenectady, NY - It was the last weekend of the regular season for most teams, with only Warwick Fast Times to look forward to on the Invitational side of the sport.  Otherwise, it was all about the champioship meets, and Eddy served as a great place to pick up a qualifying seed or two.  Check out some of the best races of the day.

A Little Story About Winston Lee...

In this profession, there comes a point where you don't find yourself surprised very often.  You see the natural progressions, and photo finishes, and while exciting to watch, not too surprising.  Saturday, I was surprised.  As I was sitting in the MileSplit booth, an athlete I didn't know, came up and asked its' purpose.  I replied, "We interview race winners over here, maybe we'll find you over here later."  The athlete, from a school I hadn't  heard of, replied, "Yeah, I can win, what's the meet record (for the 100m), I think I can get it."   After looking it up in the excellent meet programs, (the little things that impress me), I said, "Meet record is 10.48, it's a tough mark to get."  At the time, this was a full millisecond off the state leading time, from someone I had no idea of.  You could say I was skeptical.  I watched his 100m prelim, and while he took an early lead, I had assumed it was right around 11.3 territory.  Didn't really look at the times.

The finals came, and the heat lined up.  As the gun went off, the smaller figure in the blue uniform got to a good start, leading the race from 20m on.  He looked strong, with competition to his right, straight to the closing point, then reached for the line.  As he crossed, the clock clicked from 10, to 11.  It was fast, but just how fast?  Walking over to the timing system, it looks like the system went down as the finishers crossed the line.  FAT marks went out the window.  The backup hand-timer comes to tent with his lists, and, as the only record, reads off the top time, unconverted.  "10.30"  What could have been one of the fastest times ever in NY State was lost.  I asked two separate coaches of other teams, and they concurred with the 10.3 on their watches.  We may never know what the actual time was, but hopefully he could reproduce it later in the season.  If I had to guess, 10.65 may be a more reasonable call.  Whatever the situation. Winston Lee of Hudson may have become a medal threat at the State Meet.

Oh, did we mention this was his third race ever in an Invitational?  Check out the interview for the full story.

What happens when one of the biggest meets falls on one of the biggest rites of passage via High School?  You just have to do both.  The situation forced Keelin Hollowood of Saratoga into the unseeded heat of the 1500m, where she ended up winning the event overall, after her 4:43.29 eclipsed that of Marianna Lansing's Invite winning time of 4:44.40.  The two may have pushed each other even faster if raced together, but sometimes, Prom gets in the way.  This wouldn't be the first time Prom and track mixed for the Saratogans.  Remember this?  That's right, her prom date Jay Navin didn't do too shabby in the meet himself, winning the Invite 800m in a NY #4 mark of 1:53.12.  Not a bad way to start the day.

The Eddy Games provides a unique opportunity, with the meet's MVP's winning free flight and entry to the New Balance Outdoor Nationals, in Greensboro, North Carolina.  On the boys side, one athlete stood above the rest, both figuratively and literally.  Izaiah Brown (Amsterdam) stands tall amongst a crowd.  Not only that, he managed to come from the 23rd seed at the indoor state meet, to win the whole event (300m).  Speaking with his coach at the meet, they had wanted to travel down to the Armory, before the school vetoed the budget expenditure.  Next year, he promised.  In the meantime, Brown proved that his state leading mark was no fluke.  He won the open 400m in a new personal best 47.72, then returned an hour later to split 47.68 in the relay.  Not to mention a 200m prelim and final in between.  He was the inarguable choice for Male Athlete of the Meet.  Anisa Topin of Bay Shore, who won both the long and triple jumps, was awarded the Female title.  On a foul by less than a centimeter, I saw the junior hit well over 40', and proves to challenge the state record very soon.

Jay Hebert (Ticonderoga), was an athlete who burst onto the scene at last year's Eddy Games, similar to freshmen Izaiah Brown.  His mark made him a state favorite in the 2012 Eddy Meet Edition.  2013 didn't go quite so easily.  In the prelims, it looked like the day  may have been over too early for the Junior.  He had hit the 5th hurdle, tumbling off balance, and losing all rhythm.  He got back up to place third in his heat, but the pressure was on for him to make the finals.  As the finals were released, Hebert had made 7th fastest time in a final of 8.  In that same final, Hebert said "(he) took the race real easy, I was more cautious after the prelims."  Cautious, yes, but still fast.  He lowered his own state leading time to 14.33, but mentioned he knows he is ready for sub-14.  Only the rest of the season will tell. 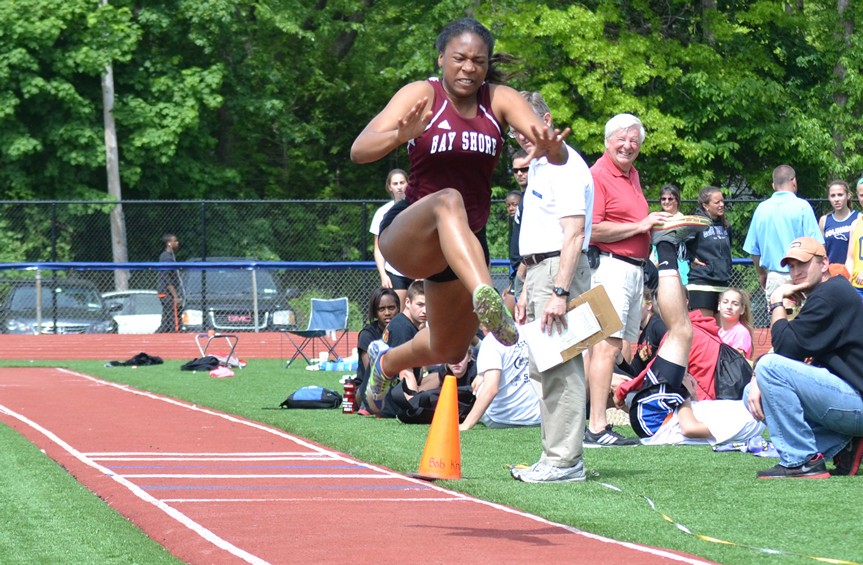 Jay Hebert back for the finals of the 110 High Hurdles. Nikari Carota (Queensbury) took first in both the prelims, and finals of the low hurdles. James Burke (Port Jefferson) ran away from the field in the full mile. Marianna Lansing (Shaker) took the Invite field in the 1500m. Brown's impressive triple secured him the win for Male MVP. Keishorea Armstrong (Emma Willard) edged out the win in the open 100m. 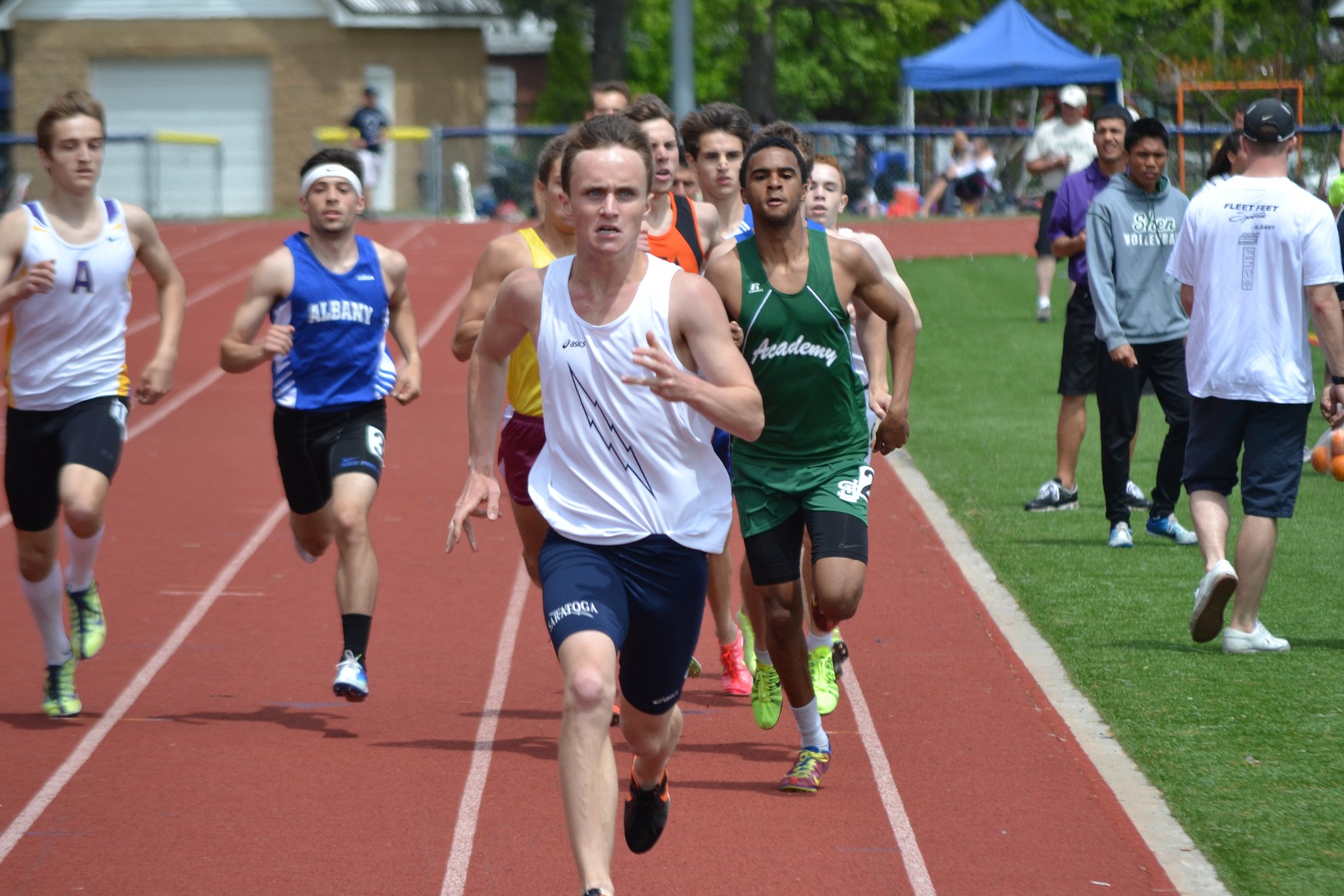 Jay Navin pushes to take the 800m for the boys. Mariah Mays (Rome Free Academy) may be NY #6 in Discus, but she also won the shot put here. Andrew Tario (Averill Park) proved that there can be more than one stellar athlete in school.  Teammate Rudy Winkler threw US #7 All-Time in the hammer the day before (253-05) Shenendehowa had a very impressing showing in the girls relays, taking 1st in both the 4x800m and 4x400m, and second in the 4x100m.